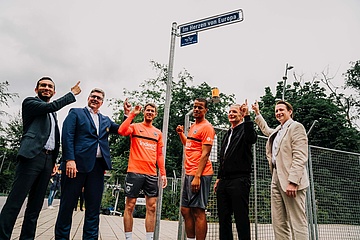 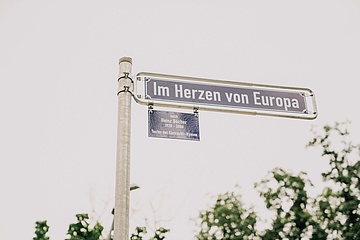 The Eintracht has a new address. It reads as many fans have known it for a long time: In the heart of Europe! The renaming of the address at Otto-Fleck-Schneise was celebrated in a festive setting on Monday. Although a big celebration was of course not possible due to Corona, the street naming attracted many spectators. For Councilman Mike Josef, it was a welcome and also emotional change, as such renamings are usually rather dry administrative acts. The timing for the new street name is no coincidence: this is now officially the site of the new ProfiCamp, which will be ready for occupancy in a few weeks.

For board spokesman Axel Hellmann, the inauguration of the new street name is a historic moment in the club's history: "This is a great day for Eintracht Frankfurt. A unanimous thank you goes to the city of Frankfurt for its quick and unanimous support. This step is unique and ensures that our employees will move into their new home in August with even more motivation than they already have," said Hellmann, who "can't imagine a better name. The inauguration was attended by board members Hellmann and Oliver Frankenbach, as well as supervisory board chairman Philip Holzer, president Peter Fischer, professionals Timothy Chandler and Erik Durm, and record Bundesliga player Karl-Heinz Körbel, among others.

The new emotional home of the traditional club includes both the complete administration wing with board and conference area as well as a separate professional sports wing for the players and a non-public company canteen. In addition, numerous bicycle parking spaces and recreational areas are available in the outdoor area in addition to a parking deck.

The new name was already decided in January by the Ortsbereit 5. At this place, which is now called "In the heart of Europe", the new ProfiCamp of Eintracht Frankfurt has been built since the laying of the foundation stone at the end of July 2019, which will unite the professional player area as well as the staff under one roof from mid-August. After the final formal step was taken with the approval of the Frankfurt City Council later in the year, Eintracht Frankfurt will officially be at home "In the Heart of Europe 1" with the completion of the two-part building complex. In doing so, the name of the address symbolises the club's and the region's presence in Europe, as well as the pro-European perspective that the club has consistently made clear through strong opinions on issues such as diversity, equality and inclusion. "We have made a powerful commitment to the European idea in recent years like no other club. Furthermore, we are playing European again this season. This street name fits the club's identity like no other," Hellmann added.

"In the Heart of Europe" was first played at what is now Deutsche Bank Park in 1997 and has since become Eintracht's club anthem. Hellmann said of the song: "We sing this anthem before kick-off - and sometimes afterwards, as we have experienced in recent years. The fact that the road to the ProfiCamp is now named like this perfectly captures our attitude to life." The idea came from long-time Eintracht fan Frank Wagner. Another small sign pays tribute to the man who in the 1970s changed the existing text to Eintracht: Heinz Böcher, at the time chairman of the Frankfurt Police Choir. His son Norbert said at the inauguration: "My father is watching with great pride from above what is happening here today. I am grateful to be able to be part of it today."

City councillor Mike Josef stressed that the street name testified to a "great emotional bond between Eintracht Frankfurt and the city, the region and far beyond". Local council chairman Christian Becker said: "Eintracht conveys an attitude to life. This is perfectly expressed here."

As a fitting finale, everyone present experienced another goosebump moment. The Frankfurt Police Choir intoned "In the Heart of Europe" directly at the new street sign - and just like in Deutsche Bank Park on match day, some listeners didn't miss the chance to sing along. (Text: Eintracht Frankfurt Fussball AG, edited & added by Frankfurt-Tipp.de)