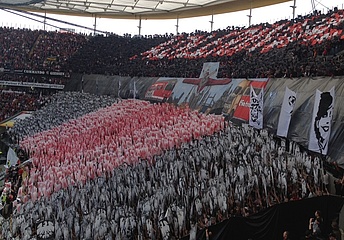 In Eintracht for the region

Intracht is living up to its name: In these difficult times for all of us, the traditional Frankfurt club has revived an old campaign. We remember: in the spring of 2016, the Eintracht Frankfurt team seemed to have already been relegated to the second division, but managed to stay in the 1st Bundesliga thanks to a brilliant final spurt in the relegation against 1. FC Nürnberg. The players didn't just achieve this on their own. It is quite clear that the Eintracht environment also played an enormous role at that time. Thanks to the outstandingly passionate support in the stadium and the tremendous momentum of the entire region, which was generated by the campaign "AUF JETZT! Together for Eintracht." campaign, important victories against Darmstadt, Mainz, Dortmund and Nuremberg were achieved in the home stretch.

The situation is now entirely different. But also in the fight against Corona applies: With fighting spirit and cohesion we can make it through the crisis. Because it is precisely against the backdrop of the social challenges that we are all currently facing that this cohesion, this fighting spirit and this stamina will be necessary in order to support the region, the people, companies and institutions in the immediate vicinity during this time and to accompany them through this crisis as unscathed as possible. Eintracht Frankfurt has therefore decided to launch the campaign "AUF JETZT! Together for Eintracht" campaign once again. This time to help together with the Eintracht family.

Eintracht board member Axel Hellmann said: "Eintracht Frankfurt, as a major club in this region and a great traditional club, has a role model function and can connect people with force and power and make a great contribution to social cohesion. Precisely because Eintracht is aware of its strong support in the region and beyond, we are particularly keen to focus attention on those who are in particular need of our support as a result of the corona crisis and the enormously stressful consequences for the healthcare system, the care system and the supply industry. In 2016 the region helped us with &sbquo;ON NOW!' and their support carried the team to cup victory and Europe. Now it's &sbquo;On Now! In unity for the region.'"

In particular, the Corona campaign supports emergency aid, care, neighbourhood assistance and donation projects of currently five important organisations. These are the Arche Frankfurt, the German Red Cross Frankfurt, the Diakonie Hessen, the Frankfurter Tafel and the University Hospital Frankfurt. Eintracht Frankfurt will actively support these institutions with various measures, monetary donations and contributions in kind - including by officials, employees and players - via the possibility of donations already announced as part of the ticket redemption.