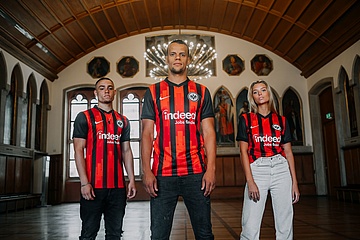 For the new Bundesliga season, there will also be a new home kit for Eintracht. This will be in the 2020/21 season entirely under the sign of the Frankfurt Roman. The motto of the jersey makes it clear why: "Our Moments"! The club associates special moments with this symbol of Frankfurt. For example, in 1959, when Eintracht Frankfurt became German champions and celebrated with over 200,000 people in Frankfurt's city centre - an impressive start to such Eintracht moments on Römerberg. In the years that followed, the eagle-bearers were frequent guests there. Be it after the lost final in the Cup of the National Champions in 1960, the titles in the 1970s and 1980s, the promotions around the turn of the millennium or, of course, the DFB Cup victory in 2018, when over 100,000 fans in the city celebrate the victorious team. The footballers of the 1st FFC Frankfurt, predecessor club of the Eintracht Frankfurt women, were also allowed to sign the city's Golden Book in the Kaisersaal. It is moments like these that the new Eintracht Frankfurt jersey reminds us of.

With its black and red vertical stripes, the jersey is kept classic as usual. The red stripes show shaded the distinctive battlements of the Roman. In the neck are the club initials "SGE", on the chest emblazoned the Eintracht eagle in black. The Nike swoosh as well as the logo of main sponsor Indeed is in white on the front. This is matched by the white flocking on the black back. The matching black jersey shorts feature red stripes on the sides with the black Eintracht eagle. The black socks with red horizontal stripes complete the new jersey set.

Frankfurt's Lord Mayor Peter Feldmann received the "Trikot Null" - the first shirt ever - from the hands of Eintracht board member Axel Hellmann. The handover took place in style in the Kaisersaal, probably the most famous room in the Römer. Feldmann was delighted with the gift, which he of course put on straight away. "I grew up with Eintracht Frankfurt and even used to stand in the G-Block myself. The fact that we have been able to celebrate great successes and magical European Cup nights with Eintracht in recent years makes the whole city and me as an Eintracht fan immensely proud. The Römer, one of Frankfurt's most important landmarks, is now immortalized in the home jersey. This shows the unity between Eintracht and the city, thank you very much for that. I also wish Eintracht every success for the coming season," Feldmann said in the Kaisersaal.

The jersey is made of a specially developed material that transitions under the chest into a breathable and more movement-friendly mesh material. Proven Dri-Fit technology keeps you dry and wicks sweat away from your body to the outside of the jersey and shorts, where it can quickly evaporate. The laser-cut vents and mesh inserts increase performance thanks to improved air circulation and also regulate the temperature. The ergonomic seams guarantee greater freedom of movement.

The women's version, the fan version and the mini jersey set of the home jersey, as well as the away and the away jerseys in the children's and adult versions are expected* to be available from August 11. No exact details are currently available for the goalkeeper jersey or the player version of the jerseys.

Eintracht Frankfurt is passing on the temporarily reduced VAT to fans in the form of lower jersey prices. Instead of 90 euros, the jersey is available in the adult stadium version for 85 euros and for children instead of 70 euros for 65 euros.

Members receive a special discount on the jerseys, as they did last year. So the stadium version for adults instead of 85 euros only 65 euros and the children's version instead of 65 euros only 50 euros for a member.

*Due to the current situation due to the Corona pandemic, there may be logistical delays, so all scheduling information is without guarantee.