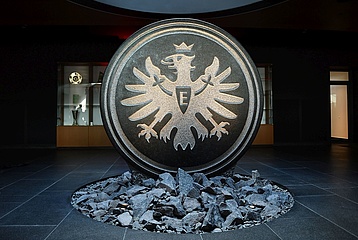 Last week the time had finally come: not far from Eintracht's living room, the Deutsche Band Park, the club's new ProfiCamp was inaugurated. The highlight of the ceremony, which was attended by representatives from politics and sport, was the unveiling of the five-tonne golden eagle, the absolute eye-catcher in the foyer of the ProfiCamp. Almost two years after the foundation stone was laid, a modern infrastructure for Eintracht players and staff has been created on 11,000 square metres. Or as board spokesman Axel Hellmann put it in his speech: "The building expresses the dignity, pride and greatness of the club. It provides for a new company and club culture."

The ProfiCamp offers a large fitness area with, among other things, a 40-meter sprint track, as well as a regeneration center with sauna, whirlpool and cold chamber. In a cinema-style conference room, the team will meet in future for video analyses and meetings. In addition to offices on the first floor, there are twelve double rooms and four single rooms one floor up for the players to retreat to. The administration with up to 280 employees is located directly next to the sports area. Here you will also find 19 meeting rooms. The building also offers a multifunctional press conference room for media representatives and a large roof terrace, which will also serve as an event location. Guests present at the inauguration were delighted with the building and the facilities it houses.