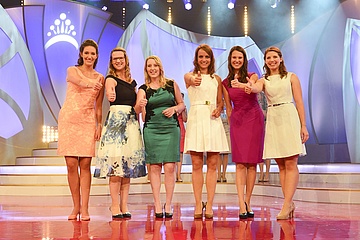 "We are proud of our Rheingau girl, who reached the finals with aplomb. As in her entire past year as area wine queen, our Louisa Follrich (photo, 2nd from left) has again represented the Rheingau quite excellently today. Louisa was once again able to prove her qualities. With a sympathetic and charming charisma, she answered all the technical questions competently. For me, our Rheingau Louisa Follrich is one of the absolute top favourites for a German crown", Seyffardt continues.

Nearly three hours the ladies fought for the entry into the final. For the thirteen candidates, who all represented one of the German wine growing regions for one year, they had to prove their wine knowledge and answer expert questions about wine marketing and wine production to a 70-member jury from the wine world and the media.

In the end, six competent wine experts had made it, among them our Rheingau Louisa Follrich, who had also recently opened the Rheingau wine market in Frankfurt. About 1,000 spectators followed the pre-selection in the Rheingoldhalle in Mainz. Numerous fans from the Rheingau region also traveled to Mainz by fan bus and supported and loudly cheered on their candidate - the 2015/16 Rheingau Wine Queen - Louisa Follrich.

"Of course, it would be fantastic if Louisa would do the same as her predecessor Katharina Fladung and also take over the office as German Wine Majesty", Seyffardt says. "Next Friday, many Rheingau people will certainly follow the final on site and at home on TV and keep their fingers crossed for Louisa Follrich", Seyffardt is sure. The decision as to who of the six female wine experts will become the 68th German Wine Queen will be made on Friday, September 30. Then, the candidates have to prove their skills and appearance in the big election gala, which will be broadcasted live by Südwest-Fernsehen from the Rheingoldhalle in Mainz, starting at 8:15 pm. The German Wine Queen will then represent the approximately 20,000 German winegrowers for one year on around 250 dates around the globe.