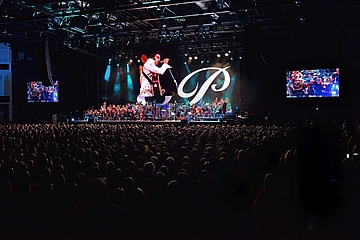 Elvis Presley is undisputedly the King of Rock`n`Roll. With countless number 1 hits and albums and over a billion records sold, he is still one of the most successful and influential artists since 1955. Experiencing Elvis live once was unfortunately denied to his younger fans in particular, as the King died in 1977 at the age of just 42. Moreover, he never really toured outside the USA. Of course there are countless tribute shows and even more Elvis impersonators. But the original remains simply unrivalled. You got a very good impression of that again on Saturday in Frankfurt, when 3,500 Elvis fans came to the Festhalle to enjoy almost 30 songs from the King's repertoire in a very special concert event.

For Priscilla Presley, who accompanies this tour, the concert in Frankfurt was more or less a home game, as she has lived in Wiesbaden for several years. During this time she also got to know and love Elvis, when he was stationed in Hesse with the US Army. Therefore, the widow of the singer has very special memories of our region, which she also shared with the audience. For her, this tour is the fulfillment of two big dreams that her husband was never able to realize during his lifetime. On the one hand, he wanted to tour Europe. On the other hand he wished to be on stage with a big orchestra and to mix his music with classical elements. Both dreams come true with THE WONDER OF YOU tour.

With the approximately 40-piece Czech National Symphony Orchestra, a band and background singers, the songs Priscilla Presley called selections of Elvis` personal favorites were performed live on stage, while the King himself could be seen and heard in old live recordings on the big video screen. The new live arrangements of the songs were perfectly matched to the film sequences, which is why there was a real concert feeling despite the very natural barrier created by playing video sequences. Of course, it's always a bit hard to get the audience off their seats when the artist isn't on stage himself. And so it took a little while in the festival hall until the concert could really get going. But at the latest during the Rock`n`Roll segment with hits like "Hound Dog" or "Don`t be cruel" it became clear that even 40 years after his death Elvis can still make a whole concert hall boil. And after an almost ecstatic cheer, like the one heard during "Suspicious Minds", many a still living artist would surely be happy at his concerts.

The song selection of the evening was absolutely successful, not only the really big hits were played, but also some lesser known songs. All in all, the 33 songs made it clear what musical range Elvis had covered. Besides the classic Rock`n`Roll and the soulful ballads, there were also excursions into the realms of Blues, Soul, Pop and Gospel. All this accompanied by a bombastic orchestra sound gave the audience goose bumps every now and then. The last audience member got goose bumps when Priscilla Presley showed some private photos and film footage or when she walked through the audience and met an older man who once met Elvis in Friedberg and who was beaming like a child when he was allowed to take a photo with her.

In total, ELVIS IN CONCERT - THE WONDER OF YOU was an all-round successful concert experience. Even if the sound in the Festhalle was once again not among the best, the approximately two and a half hour journey through the musical oeuvre of one of the greatest artists of the last century was musically, but also atmospherically a real treat. And for a few moments you could actually believe: yes, it's true - Elvis is alive!