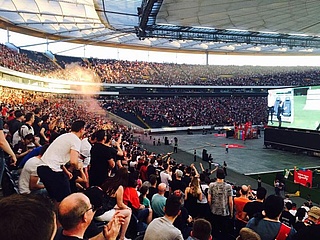 The shock of the 0:1 defeat against world champions France after an own goal by Mats Hummels has been forgotten since the 4:2 against Portugal. Now the German national team is back on the road to success and the European Championship fever has finally broken out. As we know, there are no big public viewing events this year like the one on our souvenir photo from the former Commerzbank Arena (today: Deutsche Bank Park). Nevertheless, there are some possibilities to follow the games of the German team (and also other important games) with like-minded people, to cheer together and hopefully to celebrate - of course in compliance with the applicable hygiene and distance regulations. Some nice public viewing locations we would like to introduce to you here.

It is important to know: There is a difference to previous public viewing events, such as the last World Cup. As a precautionary measure, the Public Order Office points out that, in contrast to previous years when such football tournaments were held, there were no federal or state regulations that would allow exceptions to noise emissions after 10 pm. Thus, even during the European Championship that is taking place, the noise regulations in force must be observed so that those who are not so football enthusiasts do not have to complain.

The Ordnungsamt therefore asks all restaurateurs who also want to offer football experiences to the guests present in their outdoor gastronomy to note that this time there is no public viewing exemption to the noise that may be associated with it and to be particularly considerate of local residents.

Our public viewing tips for Wednesday's game (and beyond, if applicable. Just click on the name of each location for more info):

Long Island Summer Lounge - Beach feel, skyline view: This rooftop location will cure your European Championship fever not only with a broadcast of the games on three screens, but also with a relaxed holiday atmosphere.

City Beach - Also the City Beach on the roof of the parking garage Konstablerwache brings you the EM to the big city beach - skyline view included. Make yourself comfortable on the deck chair and enjoy the games of your favorite team in this great location.

Autokino Gravenbruch - In the oldest drive-in cinema in Germany you can watch the match Germany - Hungary on a 60sqm LED screen. Tickets are only available online for 5,50 € per person. The price includes two drinks (0,5 l) of your choice. It can be assumed that also possible further games with German participation will be shown in the drive-in cinema.

Frankfurter Botschaft - The restaurant at Westhafen has set up a "beach zone" in the outdoor area on the banks of the Main. Comfortable lounge furniture or deck chairs invite you to bury your feet in the sand and keep your fingers crossed for the German team at the "Embassy Beach". The seats in the beach area cannot be reserved, the rule here is: first come first serve!

Champions - The Sports Bar between Messe and Uni Campus Bockenheim will show you the European Championship games on new Champions Terrace. With delicious drinks and food you can cheer on your favorites.

Main-Terrasse - Directly at the Mainufer at the foot of the Eisernen Steg on the Sachsenhäuser side - or as we Frankfurters say: Dribbdebach - lies this beautiful location, which shows all games with German participation. Plus there's a good range of drinks and delicious food.

Mega Discostadl - In the Stadl beer garden, all the important games of the European Championship will be broadcast on two large screens. Who gets hungry while watching, which can satisfy this at the BBQ grill station. For a place in the beer garden is a prior reservation necessary.

Lohrberg Schänke - A wonderful location with a unique view of Frankfurt. Inside you can watch the EM on a screen, in the beautiful outdoor area on several TV screens. Reservations are required!

Dionysos Restaurant - On the beautiful summer terrace of the restaurant you can enjoy not only Greek specialties, but also relaxed EM feeling when the games are broadcast on a screen.

Café Hauptwache - In the heart of the City, all games of the European Championship will be broadcast live. Plus refreshing drinks and delicious food.

Yours Sportsbar - The popular sports bar on Berger Street is also showing the European Championship games live. Reservations are recommended.

Zur Kutscherklause - For Eintracht fans, the restaurant in the Ostend is always a popular public viewing location during the Bundesliga season. Also during the European Championship King Football reigns here - but only with a limited number of seats. That's why you have to book in advance.

Kupferstecher - The restaurant in the historic premises of the former Merianbad at Merianplatz has set up a public viewing area outside. Reservations are not possible here. There is a small EM card from which orders can be placed. ATTENTION: In this area only cash payment is possible!

Na, is there the right location for you? Then quickly reserve seats (where it is possible and necessary)! We wish you a lot of fun and keep your fingers crossed for the German team!