Embrace - Frankfurt's song on the Corona crisis.
from Frankfurt-Tip 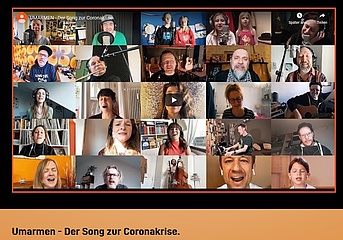 You often only notice what really means something to you in life when it's no longer there. Right now, a lot of people are realizing how important hugs are to them. What was everyday life a few weeks ago is no longer possible - or, as the song "Hugging" says, "What we need so badly brings suffering and pain." The song is a project by musician Matthias Keller, who has become known beyond the borders of Frankfurt as a member of the "U-Bahn Kontrollöre in tiefgefrorenen Frauenkleidern." In mid-March, he got about 30 people from the local music and culture scene in the greater Frankfurt area to sing the song in their own homes and film themselves doing it. The participants in the ANDERTHALBMETERMENSCHEN project include hr3 presenter Tobias Kämmerer, Kerstin Pfau from the Rodgau Monotones, guitarist Ali Neander, actress and singer Sabine Fischmann, Grüne Soße Festival initiator Maja Wolff, singer/songwriter Isabel Jasse and also comedian Stefani Kunkel (die Hilde from Bornheim).

The result is a song that gets under your skin, but also gives you hope. Keller was moved to write the song by the experience of not being allowed to hug his parents after dropping off groceries for them. Something that used to be done naturally, almost incidentally, is not allowed at the moment to avoid possible infection with the coronavirus. People have to keep a distance of one and a half meters from each other, which gave the music project its name. After the song was written and the individual contributions were recorded, video editor Thomas Klieber cut a really nice video clip from it. Music producer Markus Löhr did the final mixing of the song from the many different sources.

The song speaks from the soul of people. It is a very sad song, but in the end it gives courage in a wonderful way. Because: "Someday it'll all be over and we'll hug each other" - and that will be a hug we'll never forget!

All those who participated in this project did so with a lot of passion and completely without fee - and that, although especially artists have suffered financially from the Corona crisis. All proceeds from the song will be donated to ÄRZTE OHNE GRENZEN. More information about the project and the participants can be found at: https://www.anderthalbmetermenschen.en/