Emil Nolde. The Grotesques as guests in Wiesbaden
from FFM Aktuell 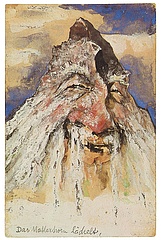 Until 09 July, the Museum Wiesbaden is hosting a very special exhibition. Emil Nolde, one of the leading Expressionist painters, is universally known for his powerful play of colours, his wild seascapes and his wonderful flower gardens. But Nolde was much more than just a landscape painter. This is particularly evident in his paintings devoted to the fantastic and the grotesque. In close cooperation with the Nolde Foundation Seebüll, an exhibition has been created that focuses on this rather unknown facet of Emil Nolde's artistic oeuvre. On display are 20 paintings and around 90 works on paper, some of which have never before been on public display.

The fascination with the grotesque and the rejection of reality run through Nolde's work from his beginnings at the end of the 19th century to the years when he was banned by the National Socialists. Especially in comparison to the atmospheric sea paintings, the pictures he painted after a trip to the South Seas or even the colourful, actually very cheerful flower paintings, the grotesque works radiate a gloomy fascination, which give him an additional, very interesting facet as an artist.

His penchant for the grotesque is particularly intense in the watercolours painted in Utenwarf in 1918 and during a stay on the Hallig Hooge in 1919. In a series of paintings, all painted in 1923, Nolde also eludes a clear interpretation and legibility of what is depicted. Between 1931 and 1935 he paints a series of large-format watercolours with the Phantasien, which prepare the so-called "Ungemalte Bilder" (Unpainted Pictures), which are created in secret, especially during the period of the occupational ban. In these, Nolde often finds fantastic and grotesque pictorial compositions, which only serve as the basis for paintings after 1945.

"Emil Nolde The Grotesques" is an exhibition of the International Days Ingelheim, accompanied by a really nice catalogue. Not only are all the works on display illustrated here. The book also contains explanatory text contributions by Caroline Dieterich, Ulrich Luckhardt, Christian Ring, Daniel J. Schreiber and Roman Zieglgänsberger. The catalogue is thus a good complement to the exhibition visit. So anyone who would like to get to know this really exciting facet of Emil Nolde's oeuvre, or who is interested in fantastic Expressionism in the truest sense of the word, should definitely pay the Museum Wiesbaden another visit.