Encore: The Freiluftkino Frankfurt goes into extension
from FFM Aktuell 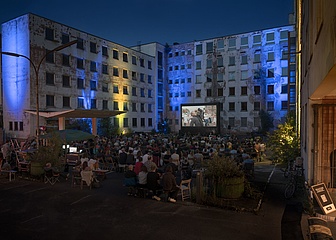 The Freiluftkino Frankfurt looks back on an extremely successful eighth season. After the last four weekends in the courtyard of the old police headquarters Frankfurt were very well attended, those responsible for the open air cinema have decided to go into extension. And so there are now from 05 to 22 August still more great cinema evenings under the open sky to experience. Included in the program are the two most popular and completely sold out films of the July program, THE RAUSH and NOMADLAND. Other highlights include Anders Thomas Jensen's bitter comedy RIDERS OF JUSTICE and the Hesse premiere of Hermann Vaske's documentary WHY ARE WE (NOT) CREATIVE. Finally, the Freiluftkino Frankfurt season celebrates its crowning finale with the cult film ROCKY HORROR PICTURE SHOW. The presale has already begun.

"The atmosphere in the old police headquarters is too unique, the film program too worth seeing and the popularity of the audience too great to stop after four weekends," said the Freiluftkino organizers* Gregor Maria Schubert, Johanna Süß and Daniel Brettschneider. "We are insanely happy that it will continue and that we will be able to help shape the Frankfurt cinema summer in August as well!" Until August 22, there are outstanding films and cinematic crowd-pleasers to be seen from Thursday to Sunday each year, which are made for a cinema experience under the open night sky. Tickets for these are available at www.freiluftkinofrankfurt.de.

A real recommendation is RIDERS OF JUSTICE. Danish director Anders Thomas Jensen's superb blend of drama and bitterly wicked comedy is notable for its dry, sometimes black humour and an absurdity that begins with a series of sad events: a stolen bicycle, a layoff, a train accident. Coincidence or a causal link? Data analyst Otto (Nikolaj Lie Kaas) investigates, assisted by his eccentric colleague Lennart (Lars Brygmann) and their even stranger friend Emmenthaler (Nicolas Bro). Together with professional soldier Markus (Mads Mikkelsen), who lost his wife in the train accident, initial findings awaken a desire for revenge.

We can also highly recommend the wonderful drama MINARI, which we reviewed in detail HERE.

The Hesse premiere of WHY ARE WE (NOT) CREATIVE? will be at the outdoor cinema on August 19. The sequel to Vaske's unique and entertaining documentary WHY ARE WE CREATIVE? and the second part of his creative trilogy in search of the secrets of creativity is a great mix of new enthusiastic creatives.

With THE ROCKY HORROR PICTURE SHOW, the outdoor cinema finds a fitting end to a diverse season on August 22. Newly engaged couple Brad Majors (Barry Bostwick) and Janet Weiss (Susan Sarandon) end up at a spooky castle after a series of unfortunate coincidences. At it, they are invited by the man of the house, Dr. Frank N. Furter (Tim Curry), to his laboratory to watch his next experiment. Furter wants to create an artificially engineered human, giving Brad and Janet a horror show that turns their lives upside down. The 1970s cult film invites audiences to sing along, talk along and dance along in more ways than one!

For all the other info, go to: www.freiluftkinofrankfurt.de