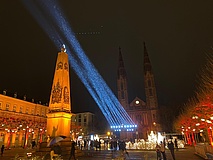 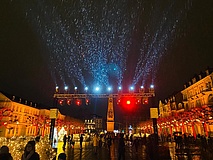 You can still enjoy a particularly magical-Christmas illumination in Wiesbaden until January 06. Because after cancellation of the popular shooting star market, the Wiesbaden city council has decided to expand the Christmas lighting in the city center and thus create a particularly atmospheric atmosphere for all people. At the start, the aim was also to support the hard-pressed retail trade. However, the hard lockdown then put a spanner in the works. The centrepiece of the Christmas illumination is a wonderful light display on Luisenplatz.

Mayor Dr Oliver Franz is delighted that the illumination has been so well received, but at the same time appeals to all visitors to keep their distance, cover their mouths and noses and to observe good hygiene. "We are delighted that we have been able to win over the company Boehlke Lichtdesign, which is well-known and respected throughout Germany and which, among other things, sets the scene for the Kurfürstendamm and Bellevue Palace in Berlin, with its lighting design concept for Wiesbaden's Luisenplatz as part of the Christmas illumination in the city centre. I would like to thank the municipal WVV Holding for the financial support in the amount of 5,000 euros. I would also like to thank the company Boehlke Lichtdesign, which contributed power worth 10,000 euros free of charge," said Oliver Heiliger, Managing Director of Wiesbaden Congress & Marketing GmbH.

Visitors are asked to responsibly adhere to the currently applicable Corona regulations. Spacing rules are to be strictly observed on the square; they will be checked by the city police and the square will be patrolled more intensively. Should it be determined that the Corona requirements are not being scrupulously adhered to, the City reserves the right to take further action. Therefore, everyone who wants to enjoy this magic of lights should take care of themselves and other people, so that the intransigence of a few people does not lead to the fact that this beautiful magic of lights must be ended prematurely. You can also find more info at: www.wiesbaden.de