Enthronement of the Frankfurt Prince and Princess
from FFM Aktuell 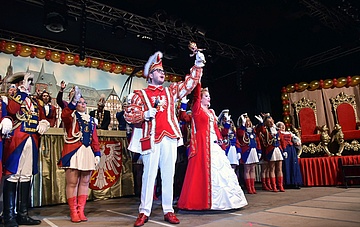 (kus) Under the motto: "Frankfurts Fastnacht die gefällt, Spaß und Tanz im Narrenzelt" celebrated on Friday, 10. February, the large council of the carnival associations and many guests the enthronement of the prince couple Patrick I. and Angie I.

With live music, guards dances and Büttenreden the meeting took place in the presence of mayor Peter Feldmann for the first time in the "fool tent" of the family Hausmann at the Ratsweg. Axel Heilmann,successful president of the Great Council, led sovereign through the event in the "Prinzliches Haus" and started the session with the Frankfurt song from the HR session.

Among others were: The Frankfurt - Guard, Die Schwertfegers, Udo Stalp as Dr. Faust, the Porzer honor guard from Cologne and the Fassnachts Rocker KUK. The highlight of the programme was the appearance of the Schlager and NDW star Markus, who got the crowd going with his well-known song "Ich will Spaß". The event was attended by representatives from all of Frankfurt's carnival clubs.