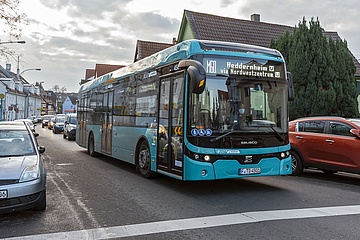 (ffm) Frankfurt's city bus service is becoming even more environmentally friendly. Three more lines have been completely converted to locally emission-free operation with battery-electric buses in these weeks. The Federal Environment Ministry is funding the electrification with several million euros.

A major step was the conversion of the M60 metro bus line to battery-electric buses. Since the timetable change on 13 December 2020, the e-buses have been running reliably, emission-free and quietly between Eschersheim and Rödelheim. They are charged at the waste-to-energy plant (MHKW) in Frankfurt am Main, which produces the electricity it needs itself by incinerating household waste. In spring 2021, lines 33 and 37 will also be "electrified" with new buses. Line 52 will follow at the end of this year.

"Frankfurt is exemplary in showing how climate targets can become tangible reality in cities," explains Florian Pronold, Parliamentary State Secretary at the Federal Ministry for the Environment, Nature Conservation and Nuclear Safety (BMU). "The city has long been committed to climate protection, and since 2018 it has been consistently electrifying its bus transport. This is because electric buses are cleaner and significantly quieter than conventional buses. This makes them good for the environment and the quality of life in cities."

In addition to the purchase of 34 of the new buses, the BMU is also partially funding the necessary charging infrastructure. The additional costs of the vehicles compared to a diesel bus are financed with up to 80 percent. The charging infrastructure for Transdev's M60 line is being funded with up to 40 percent. In total, around 7.81 million euros in funding will flow into Frankfurt for the conversion of bus lines 37, M60 and 52.

The conversion of line 33 and the charging infrastructure of ICB will be funded by the state of Hesse.

Expand local transport and make it even more climate-friendly

Deputy Transport Commissioner Klaus Oesterling states: "The use of electric buses on Frankfurt's routes will significantly reduce local emissions from inner-city traffic.“ The most important goal, he said, remains to expand local public transport, which is already particularly environmentally friendly today, and make it even more climate-friendly. Traditionally, a large part of local public transport in Frankfurt am Main is already handled electrically, namely by S-Bahn, U-Bahn and tram. "Step by step," says the traffiQ Supervisory Board Chairman, "we are now electrifying bus transport: already in 2018, Line 75 was the first bus line in Hesse to be completely converted to e-buses. Following the M60 line with 13 buses, lines 33 and 37 in the Gutleutviertel will also be electrified in spring 2021, with eleven e-buses being used here. Line 52 in Gallus will follow with twelve buses at the end of the year. From summer 2022, a total of 13 fuel cell buses are to run on the M36 line."

Train and bus are contribution to environmental protection

Frankfurter Umweltdezernentin and FES Supervisory Board Chairwoman Rosemarie Heilig explains: "The cooperation between FES and the bus company Transdev Rhein-Main GmbH is a highly visible signal for the climate-friendly transport turnaround. For the first time in Germany, waste incineration, energy generation and battery-supported, emission-free mobility are being thought together. Thanks in part to FES, Frankfurt is setting new standards here. In the future, both buses and refuse collection vehicles will drive in and out of the MHKW Frankfurt emission-free, electrified by the incineration of our citizens' household waste. I can't think of anything better to do with garbage."

The operator of the bus line M60 is the company Transdev Rhein-Main. Managing director Heiko Schütte is satisfied: "I am pleased that we have succeeded in converting the M60 to electric buses on schedule despite an extremely tight schedule. To do this, we trained our employees on the numerous requirements of the new e-buses and can now proudly say: industrial electromobility has become part of our DNA. The experience of the international Transdev Group has proven that electromobility can be implemented on a large scale and at economic prices: In Europe alone, the Transdev Group already uses more than 1,000 electric buses and thus operates the largest European e-bus fleet. Frankfurt am Main is now also benefiting from this, as it now has the first fully zero-emission bus line, the M60, with a mileage of around one million kilometres per year."

The bus lines 33 and 37 are operated by the municipal company In-der-City Bus GmbH (ICB). It can draw on its experience with the electrification of line 75 in December 2018. Since then, this inner-city line has emitted around 200 tonnes less carbon dioxide (CO2) and 640 kg less nitrogen oxide (NOx) into the environment each year. "Operational stability and mileage-dependent operating costs of the battery buses are convincing. Overall, the advantages far outweigh the disadvantage of higher investment costs," says ICB managing director Christian Schaefer, summing up experience with electric buses in operation. Now, for the first time, experience is being gained with electric articulated buses. "In recent years, ICB has built up the internal expertise to manage the technology change from diesel to locally emission-free, low-noise e-buses powered by electricity and, from 2022, hydrogen. The electric motor is the drive of the future," says Schaefer.

Tom Reinhold, managing director of Frankfurt's public transport company traffiQ, adds: "Together with our bus companies, we have succeeded in implementing two challenging projects for environmentally friendly mobility in Frankfurt with pinpoint accuracy. This was not to be expected at the beginning." In general, for example, significantly longer delivery times for the electric buses had been expected. It was also necessary to apply for subsidies for the electric buses, which cost about twice as much as a diesel bus, at an early stage. "An excellent interaction between the municipal client, the bus companies and also FES, which was rewarded by the on-time start," Reinhold thinks.

The electricity needed to run the buses on the M60 metro bus route is provided by FES Frankfurter Entsorgungs- und Service GmbH at its premises in Heddernheim. Five charging columns, each with two charging connections, have been installed to charge the 13 e-buses. Since the buses are used throughout the day, there are always enough stations available. A charging process takes a maximum of three and a half hours.

Four more charging columns will be added to the charging infrastructure during 2021. FES Managing Director Dirk Remmert: "Waste incineration plants are often not seen by the public for what they are: Powerful energy and heat generators that not only keep our homes warm in winter, but with which the solution to future issues in our cities is suddenly within reach."