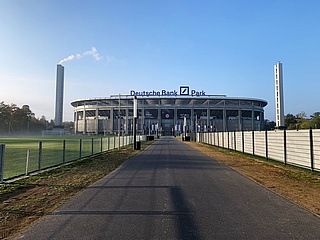 It still takes a while, but soccer fans can already look forward to the EM 2024. Because with the now published game plan it is clear that five games of the UEFA EURO 2024 will be played in Frankfurt. Among them is a round of 16 match as well as a match of the German national team. The German team will play its last group match at Deutsche Bank Park: "All soccer fans should make a note in their calendars of June 23, 2024. Because a European Championship home game at our stadium - that will be a real cracker!" says Frankfurt's Head of Sports Mike Josef. And he promises: "Frankfurt will be a worthy host city. As one of ten German host cities, we will show Europe and the world our best side as a city of sport and soccer."

The next milestone on the road to the 2024 European Football Championship is the so-called Qualifying Draw. "The draw for the qualifying groups will also take place with us in Frankfurt in the Festhalle of the Messe on October 9, 2022. It will then be determined in which constellation the 55 UEFA member associations will play for participation in the final tournament in Germany," says Sports Director Josef. As host country, Germany is automatically qualified.

The European Championship games in Frankfurt: