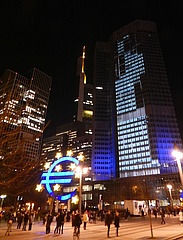 Alongside the Justitia on Römerberg and the skyline, it is one of the most photographed landmarks in Frankfurt: the Euro sculpture in front of the former headquarters of the ECB on Willy-Brandt-Platz. Centrally located between the banks of the Main and the Zeil, the 14-meter-high work of art by Ottmar Hörl has been an integral part of Frankfurt's cityscape since its installation in 2001. Nevertheless, in recent months it has repeatedly looked as if the sculpture would not be preserved - at least not at its familiar location. The reason for this was that no sponsors could be found for the financing and at the same time the costs for the preservation of the sculpture had risen considerably, in particular due to increasing vandalism.

This would have had the consequence that the non-profit independent association Frankfurter Kultur Komitee e.V., the owner of the Euro-Sculpture, would have had to auction the sculpture on October 15, 2022. In view of this situation and due to the public discussion in the media, the issue became public. It was ultimately this public discourse that led to the Frankfurt-based fintech CAIZ Development GmbH becoming aware of the issues surrounding the sculpture. As a company rooted in the local financial center, they quickly decided to realize the necessary financing for the euro symbol to remain in Frankfurt.

CAIZ Development GmbH is a fintech based in Frankfurt am Main that is developing a blockchain-based ecosystem for financial inclusion. For CAIZ Development, this means, among other things, access to a transactional account that is currently unavailable to over two billion people worldwide. "Caiz" in Arabic stands for "lawful, trustworthy and legal" and thus represents a general ethical orientation in the financial world.

The sponsorship does not only include covering the maintenance costs for the Euro Sculpture for the next five years. Rather, events are also to be held by the main sponsor on topics that correspond to the statutory purpose of the Frankfurter Kultur Komitee e.V. association.

The City of Frankfurt am Main, the European Central Bank, the Hessian Ministry of Finance will continue to be involved in the activities around the euro symbol.