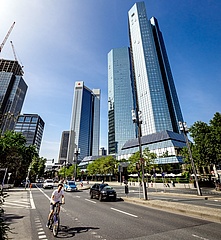 The cars are gone - now the bikes are coming! Following the loss of the IAA, Messe Frankfurt is pleased to announce that the Eurobike bike show will be coming to the Main metropolis from 2022. With three specialist days and a subsequent festival weekend, the world's leading trade fair for everything to do with bicycles is to be held in Frankfurt from Wednesday, 13 to Sunday, 17 July 2022. The organiser is a joint company of Messe Frankfurt and the previous organiser, Messe Friedrichshafen. This trade fair brings the city another step closer to its goal of becoming the most bicycle-friendly major city in the republic.

At its previous location, the trade fair had recently reached a capacity limit due to the steadily increasing interest. More than 70,000 people had visited the fair over five days - including one public day. This shows the growth potential that is possible with the move to Frankfurt. Lord Mayor Peter Feldmann is also convinced that not only the trade fair but also the new location can profit from the change. That is why he had personally lobbied his Friedrichshafen colleague Andreas Brand and during a visit to Friedrichshafen for the change of location to the Main. "Cycling is a real issue for the future," said Feldmann. "The topics of climate protection and transport turnaround are at the top of our agenda. The Eurobike will be a beacon in a city that is preparing to put cycling at the heart of the transport policy debate. I can't imagine a more authentic location."

The Frankfurt city leader thanked his Friedrichshafen counterpart Brand in particular for the trusting cooperation and discussions in the run-up to the spectacular trade show deal. The basis is a joint venture between the trade fair companies of both cities. Among other things, Friedrichshafen will contribute its Eurobike brand cluster to the future "fairnamic GmbH", while Messe Frankfurt will contribute financial resources as well as the support of its worldwide sales network. The partners want to sharpen the international profile of the Eurobike in particular through this cooperation.

The Eurobike is an international trade fair for everything to do with bicycles and electric bikes. Held annually since 1991 at the beginning of September at the Friedrichshafen Exhibition Centre, it is the world's largest leading trade fair in the bicycle sector, together with Interbike (Las Vegas) and the Taipei Cycle Show (Taiwan). More info is also available at: www.eurobike-frankfurt.com