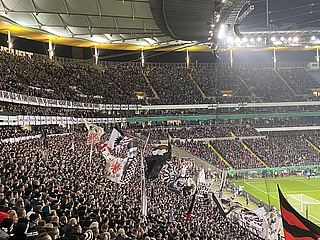 Eintracht Frankfurt will allow the Europa League first leg against FC Basel tomorrow (Thursday) to take place with spectators, but under conditions. This was confirmed by Stefan Majer, head of health of the city of Frankfurt.

Despite the recommendation of Federal Health Minister Jens Spahn (CDU) to cancel events with more than 1,000 spectators due to the coronavirus epidemic, the club, the municipal health department and the Hessian health ministry have agreed to allow fans into the stadium under conditions. On which measures fans and responsible persons must be prepared, the Eintracht board Axel Hellmann and the municipal health department currently at a press conference.

Yesterday, the state of Hesse had also recommended the cancellation of all major events with more than 1000 participants. It was thereby referred to the risk of being infected with the pathogen. This applies especially in closed rooms.

In Hesse, the number of Corona cases has increased to currently 35. That is nine infected more than the state had reported the day before. However, according to the Ministry of Social Affairs, all those who have fallen ill currently have fairly mild courses with mild or no symptoms.

Eintracht board member Axel Hellmann: "The health department has now come to a different assessment of the risk situation than still this morning. We regret this very much, but we have also always stressed that we accept any official order based on changed conditions, as the health of our fans and visitors has absolute priority." (Eintracht Frankfurt Fussball AG)