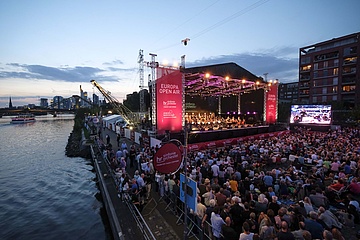 It's always a very special summer experience when the Wesel shipyard transforms for one evening into an open air stage for a unique outdoor concert. It has only taken a few years for the Europa Open Air to develop into one of the summer highlights of Frankfurt's cultural calendar. Classical music in the open air, on the banks of the River Main with a view of the skyline - this will once again attract thousands of enthusiastic visitors. In 2018, this wonderful concert experience will again simultaneously mark the start of the orchestra's season and the launch of the European Central Bank's (ECB) EUROPA CULTURAL DAYS. The hr-Bigband will also be taking part once again, opening the concert evening in the open air on Thursday, 23 August, at 6 pm. Admission starts at 4 p.m. and admission is free.

It is definitely worth coming early. In previous years, around 20,000 enthusiastic concertgoers have enjoyed the Europa Open Air in a summery atmosphere on the banks of the River Main. Anyone who wants to get a good seat there should make their way in good time.

As part of the ECB's EUROPA CULTURAL DAYS (23 August - 16 October 2018), whose theme country this year is Lithuania, everything at the Europa Open Air will also revolve musically around the Baltic state. Together with the other two Baltic states Latvia and Estonia, Lithuania is celebrating 100 years of independence this year. Andr&eacute;s Orozco-Estrada and the hr-Sinfonieorchester, together with the Lithuanian accordion star Martynas Levickis, the traditional choir Jauna Muzika from Vilnius and distinguished vocal soloists from Lithuania, will present a programme all about the mythical fairy tale worlds and the impressive singing traditions there. Works by Aaron Copland, Igor Stravinsky and Mikalojus Čiurlionis will be performed, as well as the famous choral finale from Ludwig van Beethoven's 9th Symphony with Friedrich Schiller's "Ode to Joy", today's European anthem.

This year, the hr-Bigband has invited Lithuanian singer Viktorija Gečytė, who will bring along pearls from the Great American Songbook as well as original compositions inspired by the folklore and landscape of her homeland.