European Football Championship 2024: Frankfurt has been chosen by the DFB as the venue
from FFM Aktuell 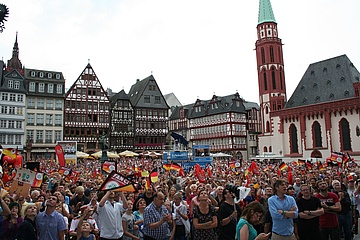 It is not yet certain whether the European Championship 2024 will come to Germany. But if the choice will be in favor of Germany (in a year we know more), then Frankfurt can once again show its particularly sporty and hospitable side. Because our beautiful city is one of the ten cities with which the German Football Association will bid to host the UEFA European Football Championship in 2024. The choice was close - Frankfurt was ranked 10th - but that does not change the great joy about this decision.

(kus) Lord Mayor Peter Feldmann and Head of the Sports Department Markus Frank are thrilled that Frankfurt was able to prevail with its application as a potential venue together with nine other cities.

"The 2024 European Championship is a great opportunity to position our city nationally and internationally. The 2006 World Cup and 2011 World Cup proved that. Frankfurt definitely wants to present itself as a good host. If the bid is successful, it will be nice that our football fans will be able to watch matches in our own stadium," says Lord Mayor Feldmann.

Councillor Markus Frank is delighted with the selection: "With the decision in favour of Frankfurt, we are recognised as a sports city and we will not let up in our efforts to further develop the sports infrastructure for our clubs."

Already at the Men's World Cup in 2006 as well as the Women's World Cup in 2011, Frankfurt am Main each experienced an exciting summer full of emotions, eventful matches and full stadiums as well as large public viewings in the heart of our city, on the banks of the Main. The aim now is to build on these events again in 2024. Should Germany's bid to host the event be successful, Frankfurt am Main can look forward to eventful weeks with lots of cultural exchange, fun and emotions.

In addition to Germany, Turkey is also currently up for selection. The European Football Union will not decide which of the two countries will be the official host of the 2024 European Championship until next year.