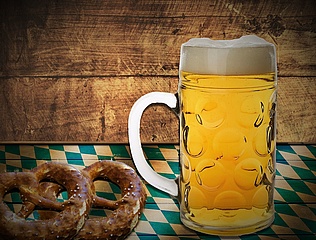 The again - although only at a low level but still continuously - rising infection figures especially in Frankfurt prove: The pandemic is not over yet. It is true that more is possible again than a few weeks ago and in view of the rising vaccination rate, a rising incidence fortunately does not necessarily mean that the situation in the hospitals will also worsen again. But it is also clear that the coming months will not be quite as easy as many of us would like. And that is the reason why the Frankfurt Oktoberfest, a major event that has established itself as one of the most popular events in Frankfurt and the surrounding area in recent years, has now been cancelled. The cancellation was announced today by the organizers, Patrick and Dennis Hausmann and Kai Mann.

The plan was to have the Frankfurt Oktoberfest 2021 from September 16 to October 10 in the large marquee at Deutsche Bank Park. There, around 60,000 people had last celebrated the eleventh birthday of the Frankfurt Gaudi in the Festhalle Hausmann in autumn 2019. But now it remains silent here, as it was last year.

A looming fourth wave of the pandemic, uncertainties in the occupancy of indoor rooms - "the risk for the implementation of the Oktoberfest is simply too high. We want to and will take responsibility for our guests as well as the employees of our companies", says Patrick Hausmann. His brother Dennis Hausmann adds: "Our festival thrives on conviviality. We believe people are - regardless of all legal regulations - not yet ready for so much closeness."

Kai Mann joins in and explains: "We found the decision to cancel the festival for the second time in a row very difficult. I would like to thank everyone who has remained loyal to us during this difficult time: the sponsors, our partners, the artists and, of course, especially our visitors, with whom we are in permanent contact via social networks, by mail and telephone. Unfortunately, we have to state once again: Now is not the time for a big party like this. And so we hope that all Frankfurt Oktoberfest fans will gather at Deutsche Bank Park in 2022 - in any case, we're going to start preparing for next year right now."

If there's one thing we've learned in the past few months, it's that the pandemic unfortunately doesn't stick to plans and wishes. Of course, it looks quite likely that we will be able to celebrate such festivals again in 2022 without any worries. And that is exactly what the organizers should now hope for, as should all fans of the Frankfurt Oktoberfest.