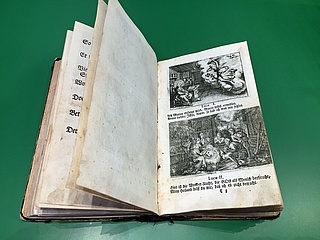 (ffm) The world of biblical images and symbols can be discovered in the exhibition "Christmas" at the Frankfurt Bibelhaus from Wednesday, November 14, until March 31, 2019. A new acquisition of the Bibelhaus will also be presented. It is a picture Bible, which the councillor and mayor Johann Matthias Bansa wrote in 1746 for his children and grandchildren. The special exhibition will be opened on Tuesday, November 13, at 5 p.m. by Ina Hartwig, head of the department of culture.

The so-called Bansa Bible is on public display in the exhibition for the first time in Frankfurt. It consists of copperplate engravings of Old and New Testament stories from the Basel engraver Merian's workshop and two-liner verses for each image by Johann Matthias Bansa. According to research by the Bibelhaus Erlebnis Museum, there are probably only two copies left as library holdings of the book, which was published in a small edition.

The museum acquired the picture Bible with the support of the Evangelical Church in Hesse and Nassau and Bankhaus Metzler.

Director of Culture Hartwig is delighted that the Bansa Bible is returning to Frankfurt. "This has succeeded in focusing attention on a very special citizen of the 18th century. His commitment to the community still impresses today," explains the department head, emphasizing that "his picture bible is a small treasure that can now shine in public again."

With coins and figurines, inscriptions, icons and quotations, the exhibition shows biblical and extra-biblical roots of Christmas as well as the origin of well-known Christmas motifs and their history of impact from antiquity to the present day. Another topic is how Christmas has been politically abused. It also looks at the differences and similarities in the birth of a holy child in world religions.

For example, exhibits include the calendar inscription from Priene dating to 9 B.C., which calls the birth of Emperor Augustus a "birthday of God." Christmas postcards from the world wars, Christmas tree decorations and literary evidence show how differently the holiday has been interpreted at different times. "There are many clichés surrounding the most beautiful holiday of the year," says Bibelhaus director Jürgen Schefzyk. "Our exhibition shows what is biblical in origin or also comes from other sources."

The accompanying program includes the group tour "A Sarcophagus in Bethlehem? A Mystery in 30 Minutes." During a one-hour group visit to the "Christmas" exhibit, participants set out to find the solution to the riddle.