Exhibition opening for the FRANKfurtstyleaward in the MyZeil
from FFM Aktuell 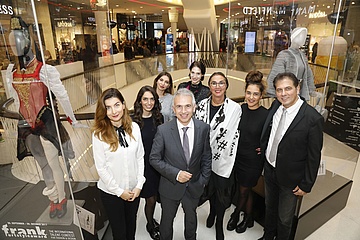 "We have a top level to offer in the cultural and creative industries that hardly any other German city can boast. With around 36,800 people employed in these fields, we can rightly claim that Frankfurt is an interdisciplinary and international creative location, a true creative hub," said Peter Feldmann about the scene that points the way ahead in Frankfurt.

After the opening of the exhibition, Lord Mayor Peter Feldmann and up-and-coming designers Isabelle Asfour and Anastasia Liebe led guests to the exhibition exhibits. The exhibition shows six of the innovative designs of the Top 60 Collection "Modern Reality" with the categories #working #sporting #dating. The designs will be on display at MyZeil until Monday, October 30.

In its anniversary year, the FRANKfurtstyleaward is for the first time giving the general public a glimpse of its Top 60 Collection before the official premiere in November. In September, a selection from the collection was a guest at Apparel Sourcing Paris at the invitation of Messe Frankfurt, and in October models will be showing current designs and a "best-of" of the last ten years as part of THE ARTS+ at the Frankfurt Book Fair.

After the anniversary gala, the Top 60 Collection will continue on its international roadshow. On the schedule are the fashion capitals Berlin, Paris, Shanghai, Vancouver and New York. The roadshow is made possible by the partners Texpertise Network of Messe Frankfurt and FrankfurtRheinMain GmbH.

In addition to the Top 60 Collection, designer Berkan Tüzünatac will be presenting the "Couture of the Opera" show by his label Berkan Design at the anniversary gala taking place on 10 November 2017 at the Fraport Forum. The highlight will be the award ceremony for the winners of the international competition for young designers.

More info can be found at: http://frankfurtstyleaward.com/