Experience STAR WARS once in a lifetime
from FFM Aktuell 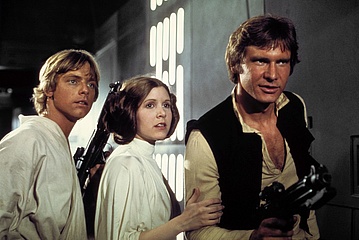 When this sentence appears on the screen or on the screen, then this alone creates goosebumps for many. But if then also the ingenious music of John Williams starts, then the enthusiasm of real STAR WARS fans knows no bounds. For exactly forty years, the greatest science fiction saga in film history has thrilled millions of fans of all generations worldwide, not least because of the soundtrack composed by John Williams. Even those who have never seen a single STAR WARS film - and there are supposed to be people like that - will certainly know the title melody or the Darth Vader theme - one of the best pieces of film music ever. No wonder, then, that the soundtrack is demonstrably one of the most successful in cinema history.

Whoever has seen the films - especially the original trilogy - countless times, now gets the opportunity to experience the first film once again in a completely new, special way: Because at the Alte Oper, Star Wars: A New Hope will be an unforgettable concert experience. Conducted by Christian Schumann, the Pilsen Philharmonic Orchestra will perform the Oscar®, Golden Globe and Grammy award-winning music while simultaneously showing the entire film on a big screen.

In Star Wars: A New Hope, Luke Skywalker is drawn into the struggle of the Rebel Alliance nineteen years after the Empire was created when he meets Obi-Wan Kenobi, who had been living in seclusion on the desert planet of Tatooine for years. Obi-Wan begins Luke's Jedi training, and he accompanies him on a daring mission to rescue the enchanting Rebel leader Princess Leia from the clutches of the evil Empire. Even as Obi-Wan sacrifices himself in a lightsaber duel against Darth Vader, his former apprentice Luke proves he is one with the Force as he is able to destroy the Empire's dreaded Death Star.

Since the release of the first installment 40 years ago, the Star Wars saga, masterminded in every detail by George Lucas, has revolutionized Hollywood's cinematic landscape and has lost none of its charm to this day. With its mythic story, compelling characters, groundbreaking special effects, and world-famous score by John Williams, the Star Wars saga has become a true icon of American culture. In addition to his film scores, Williams is a renowned conductor and respected composer of concert works. This can be seen, among other things, in individual themes of the Star Wars soundtrack, as Williams oriented himself in some motifs and compositional techniques on none other than Richard Wagner and his musical idiom. Thus, in addition to the use of leitmotif technique, the clearest Wagnerian reference can be found in Luke Skywalker's heroic theme: here one recognizes Siegfried's horn call with its youthfully heroic rising fifth, which immediately captivates the listener emotionally. Experience one of the most successful film adaptations in cinema history as a multimedia concert experience!