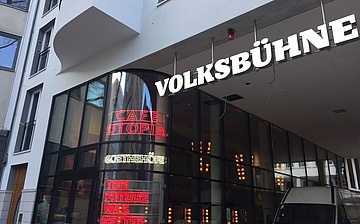 The time has finally come. After several delays, the new Volksbühne in the Grosser Hirschgraben will open its doors to the public on Friday, January 24. For the premiere, the Volksbühne, together with the Ensemble Modern, will perform the world premiere of a Frankfurt classic: "Struwwelpeter" will be played to a sold-out house. Tickets have not been available for many weeks. But you can still be there for this special premiere: In collaboration with the Volksbühne and the Ensemble Modern, the City of Frankfurt's Department of Culture is broadcasting the opening premiere via livestream on its social media service Frankfurt&Culture. Head of Culture Ina Hartwig is pleased to be able to offer this opportunity to interested citizens and adds: "I hope you enjoy it - whether in the Cantate Hall or at home on the sofa!"

Also Michael Quast is happy that the debut of the new house will thus also be made accessible to those who no longer got hold of tickets. After all, the collaboration with the renowned Frankfurt-based orchestra is "a bang for the buck for a new theater that wants to address everyone," said Quast, the director of the Volksbühne.

For current dates and more information about the Volksbühne's programme at the Großer Hirschgraben, visit: http://www.volksbuehne.net