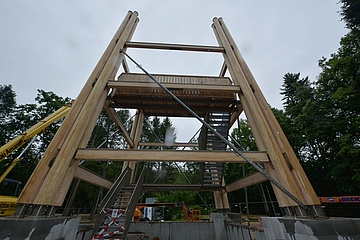 As we told you earlier, the machined wooden elements of the new Goetheturm arrived in Frankfurt in early July and with the assembly of the first elements, the official reconstruction of the popular landmark in Frankfurt's city forest began on Wednesday, July 8. It is still in all of our painful memories that the Goethe Tower was destroyed by arson in October 2017. The road to reconstruction was not easy, but for the people of Frankfurt nothing else was out of the question: the tower must be reconstructed true to the original. So now the time has come and presumably next autumn the observation tower, which will hardly differ visually from the historical model, can be climbed again.

Lord Mayor Peter Feldmann, like so many others, is delighted that the reconstruction can now start: "Our Goetheturm is a visible traditional Frankfurt landmark that has grown on all of us like the skyline or the banks of the Main. It was a stab in the Frankfurt soul when we woke up one morning and learned of the arson attack on the Goetheturm. The rebuilding of the Goetheturm is therefore a clear sign to me that we Frankfurters will not be intimidated by intellectual, or material, arsonists."

For anyone who still has any last doubts that the new tower will be able to capture the charm of the original, head of the building department Jan Schneider has reassuring news: "The new Goetheturm will look exactly like the old one, with which many Frankfurt residents associate very personal memories. They can look forward to soon finding the situation again at the Goetheruh that they have sorely missed since the fire. Technically, however, there have been some improvements: Not only does the structure comply with today's regulations, but it can also be better maintained and more easily renovated in the future. I am sure we will enjoy the new tower for many decades to come."

Painfully Missed and Soon Back

The tower will be 43 meters high when completed - just like the original. This is also in line with the wishes of the people of Frankfurt, who had decided in an online survey directly after the fire with a clear majority for a faithful reconstruction. The concrete foundations have already been completed and will later be clad in sandstone. Visually, the new tower will hardly differ from the original: It has exactly the same height, the characteristic round supports as well as the horizontal and diagonal struts correspond geometrically to the original construction. However, different wood will be used for reasons of durability: Whereas in 1931 around 340 cubic metres of pine, beech and oak from the city forest were used, the new tower is made of sweet chestnut from southern France and northern Spain as well as oak from the Black Forest. The main supporting structure is made of glued laminated timber from sweet chestnut, for which the Hessian Ministry of Economics, Energy, Transport and Regional Development granted individual approval last autumn. Stair treads and landings will be made of oak.

The cost of the new tower is around 2.4 million euros and will be largely covered by insurance. Helpful for the financing are however also the numerous donations of citizens and enterprises, by which for example the surrounding field of the tower can be arranged attractively. In addition to smaller and larger financial donations, the project is also supported by contributions in kind.

And here again all the figures and data at a glance:

April 2018: Commissioning of the engineering firm Wirth-Haker with the object and structural design

October 2019: Work on the foundation begins

November 2019: Project-related building permit for glulam made of sweet chestnut is granted

From April 2020: prefabrication/trimming of timber