Families in a Box
from FFM Aktuell 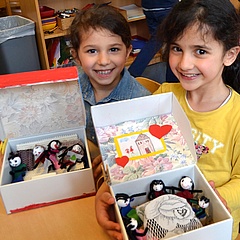 (kus) Family is more than father, mother, child - reality has long since expanded the concept of family. In the meantime, children and young people live in patchwork families, with separated parents, in rainbow or adoptive families.

The "Families in the Box", which 120 children and young people from the west of Frankfurt have designed, are as colourful as real life. The question "What is family for you?" was translated by the little artists into very individual installations.

The art action is an initiative of the Frankfurt Alliance for Families. Founded in 2005, the Alliance is committed to a family-friendly, tolerant and open Frankfurt and is based at the Frankfurt Children's Office.

The public library is presenting the exhibition "My Family - Families in a Box" from February 11 to March 10 at the Central Children's and Young People's Library in Bornheim. The library, which is popular with young and old patrons, records around 152,000 visits per year. The exhibition can be visited during opening hours - Tuesdays to Fridays from 1pm to 7pm and Saturdays from 11am to 4pm. School classes and children's groups can also be inspired by the exhibition outside opening hours as part of a group tour