Farewell to KASHI
from FFM Aktuell 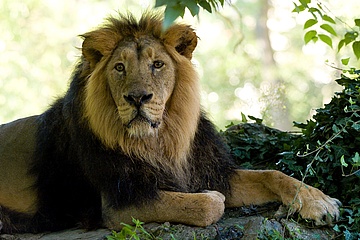 Frankfurt Zoo's lion had to be euthanized

It is always a great pleasure when new additions or offspring can be reported from the zoo. But unfortunately, every now and then there is also very sad news. And some of them are particularly painful. For example the news that the Asiatic lion KASHI had to be put to sleep this morning at the age of almost eighteen. He had been having massive problems with his teeth and degenerative changes in his jaw for months. He had to be operated on several times. When nothing more could be done for the old lion veterinarily, the decision was made to spare him further pain.

"You could tell the lion was not doing well in the last few days. He came through the last dental surgery in June just fine, but he wouldn't eat after that. In view of his age and the pain, which could not be relieved by medication, we made the difficult decision to euthanize KASHI, as an improvement of his condition could no longer be achieved. In addition, at 18 years of age, he has reached an age that can be considered very high for a male lion," explains Zoo Director Professor Dr. Manfred Niekisch.

The farewell to KASHI is not easy for anyone at the zoo. After all, the lion, born in 1999 in the Cotswold Wildlife Park and Gardens in England, had lived in Frankfurt since 2001. He had two cubs with lioness KIRI in 2003. Through his daughter JOY, he became a great-grandfather six times over.

Since 2014, he shared the enclosure with ZARINA. The five-year-old lioness also came to Frankfurt from England in 2014. The two got along extremely well. However, they did not have any offspring.

Asian lions (Panthera leo persica) are considered endangered according to the Red List of the World Conservation Union IUCN. "We want," says Niekisch, "not least for this reason, to continue to show Asiatic lions and also to participate in their breeding. In coordination with the studbook coordinator, we will try to find a partner for ZARINA again as soon as possible."