Farewell to orangutan Djambi at Frankfurt Zoo
from FFM Aktuell 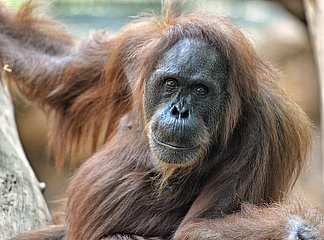 (kus) Female orangutan Djambi passed away on Sunday, September 3, at the ripe old age of about 58. The aged Djambi was not sick or conspicuous; on the contrary, the old female was an integral part of the orangutan group until the end and got along well with all group members.

Osteoarthritis had affected Djambi, who was very popular with many zoo visitors, for several years and she had been receiving veterinary treatment for it, but she was still in good shape and actively participated in group life. "However, on Saturday Djambi refused food, she seemed to have stomach and tooth pain and was given a painkiller to which she initially responded well," reported zoo director Professor Dr Manfred Niekisch. "However, Djambi was worse again on Sunday morning and had to be treated again. Then, on Sunday afternoon, the old female died quite unexpectedly."

Djambi was still a tomboy. She was probably born in 1959, but the exact date of birth is not known. In 1964 she moved from Hanover to Gelsenkirchen. Since 1966 Djambi then lived in Frankfurt and was an integral part of the Frankfurt orangutan group. She has had eight children, three of whom still live in other zoos.

Djambi's age has even outstripped great-great Charly, who had to be put down at 57. This makes her one of the five oldest orangutans in zoos worldwide. In the wild, the age record for female orangutans is an estimated 53 years. Djambi has had a long, full life and yet it is also difficult for all zoo staff to say goodbye to her forever