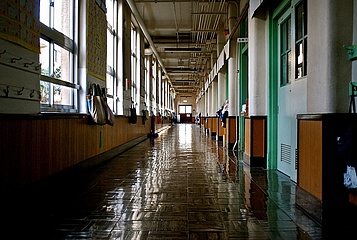 UPDATE as of 4/25/2021, 4pm: Frankfurt's schools will now close directly tomorrow (Monday) after all and transition to distance learning! That's what the state education department has announced. There will be no transitional arrangement with it, but only an emergency care. For graduating classes, face-to-face classes will continue to be offered.

Original article: With the coming into force of the Infection Protection Act, the following now also applies in Frankfurt: if the incidence is over 100 on three days in a row, the schools will go into distance teaching on the day after next. If the incidence is 165 on three consecutive days, schools and daycare centers will be closed the day after next. Exceptions apply to graduating classes and special schools. The law does not provide for a differentiation by grade level. In this case, there will be emergency care. More detailed regulations on this will be worked out in the course of the coming week.

Therefore, it was also initially planned that no closures of daycare centers or schools would be scheduled for the coming week, regardless of the incidence. But this plan has now had to be adjusted. Since the incidence in Frankfurt is more than three days above 165, it must already be reacted to from Monday. Nevertheless, there should be no abrupt closures of schools and daycare centers. Therefore, Frankfurt's head of education, Sylvia Weber, has presented a step-by-step plan for the transfer of Frankfurt's schools and daycare centers to emergency care. This is intended to give parents the opportunity to prepare, while also taking into account the requirements of the so-called "federal emergency brake."

"Parents need time to adjust to the new situation," Weber said. "That's why I've given them my word that Frankfurt's daycare centers and schools will not yet switch to emergency operations with strict admission requirements in the coming week, as outlined by the state government at Friday's press conference - regardless of incidence. That assurance stands."

Weber commented, "The short notice announcement on a weekend makes a staged approach all the more necessary. I cannot and will not expect parents to reorganize the care of their children within a few hours."

The step-by-step plan she developed in consultation with providers and those affected is compliant with the new infection control regulations, the department head assured.

By the end of the week, stage one takes effect, in which the attendance requirement in schools is lifted, but the application of the selection criteria for emergency care in the Kitas, ESB and Horten is waived.

Stage two will take effect the following week, with emergency childcare in schools and after-school centres in line with the county's requirements - for single parents when both parents are working, because of hardship and for reasons of child welfare. She is in close and continuous exchange with the childcare providers and will inform parents about the exact modalities of the emergency care in the course of the coming week, Weber assures.

"Frankfurt's parents can rely on me," Weber concludes. "As a city, we take both seriously: health protection - and the well-being of our children."