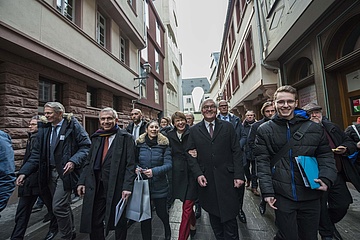 On Thursday, Lord Mayor Peter Feldmann received a distinguished visit to Frankfurt: Federal President Frank-Walter Steinmeier and his wife Elke Büdenbender came to the Main metropolis. Here he met representatives of the police authorities, police officers and committed citizens for talks. The President of the Federal Republic of Germany was informed during a varied, full-day programme of visits on issues of security, crime and prevention as well as living together in a large international city with many immigrants.

This is not the first time that the President of the Federal Republic of Germany has paid a visit to Frankfurt. The Lord Mayor was particularly pleased about this: “The City of Frankfurt is very pleased about the renewed visit of our Federal President. His visit on the occasion of the awarding of the Bubis Prize is just as good a memory to me as our conversation a few days ago about the development of our Paulskirche into a place of democracy and history that attracts attention throughout Germany. His visit is dedicated to the opportunities of international Frankfurt. We Frankfurters see our internationality as a necessary condition on the basis of which a good part of our prosperity and trade is based. As a dynamic, international city that is growing and in which more children are born every year, we are very happy to be hosts and it is an honour for me to welcome Frank-Walter Steinmeier to our new old town this afternoon.“

The first stop of this visit took Steinmeier to the police headquarters. The focus here was on the security situation in Frankfurt and the House of Juvenile Justice project. And there was positive news to announce right away: The number of criminal offences in the Main metropolis has steadily declined in recent years. “I am pleased to welcome you to the city that is becoming ever safer“, said Lord Mayor Feldmann during the briefing with the police. In 2017, for example, the number of criminal offences fell by 4.7 per cent compared with the previous year. It thus reached its lowest level in 40 years. At the same time, the awareness rate rose by 3.2 percentage points to 64.2 per cent.

The youth justice institutions played a significant role in this development. These follow the motto “Help to educate before you punish“. There are two facilities, in Höchst and in the north of Frankfurt. A third one is planned in the east of the city. The youth justice houses pursue the integrated approach of responding promptly and with coordinated means to behaviour of children, adolescents and adolescents that is relevant to criminal law. The aim is to take into account the life situation of young people and thus prevent further delinquency. The strengthening of prevention work as well as cooperation with other partners and concrete offers of help - for example addiction counselling - form a further focal point of the work.

Mayor Feldmann explained the highly preventive approach of this form of modern juvenile justice using the example of the institution in Mertonviertel. Five institutions are working together on this: Police, public prosecutor's office, juvenile court assistance, perpetrator-victim compensation and the association Kinder- und Jugendhilfe. Against the background of the educational concept anchored in juvenile criminal law, young people can be offered offers and solutions within a short period of time following a criminal offence. “This is the right way and that is why I am grateful to the President of the Federal Republic for his visit, which draws attention to this groundbreaking model for the whole republic“, emphasized the Lord Mayor.

The next stop on the tight program of the Federal President was the girls' office Milena in Rödelheim. Here, Steinmeier visited employees as well as fugitive women and girls who find support in this integration facility. In the afternoon he invited us to his coffee table in the city centre. With his guests, Steinmeier discussed critical questions, open tasks and problems in Frankfurt and much more. The coffee table is a series of talks by the head of state to get into conversation with different citizens in different places. The invited persons hold different, sometimes conflicting positions on topics such as security or dealing with immigration. Further information can be found at Http://www.bundespraesident.de/Kaffeetafel

At the end a guided tour through Frankfurt's new Old Town by district ambassadors of the Stiftung Polytechnische Gesellschaft and Lord Mayor Peter Feldmann was on the agenda. „I am delighted that the Federal President has taken the time to visit our new Old Town. I was happy to tell him about the great popularity and how the project came about. Without the broad discussion in the urban society we would not have managed this. The result shows that our path was the right one“, said Feldmann.

The Federal President and his wife bid farewell after a varied and informative day in Frankfurt, which certainly did not mark the last visit of the head of state to our city. It became clear where Frankfurt does good, even exemplary work, but also where there are problems that need to be tackled.