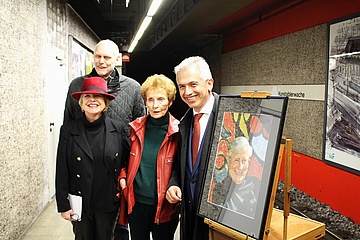 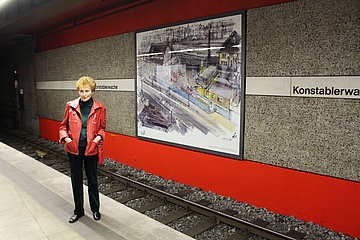 The construction of the first subway lines in Frankfurt fascinated many citizens more than fifty years ago. Among them was the artist Ferry Ahrl&eacute;, who created a series of murals of the newly emerging subway lines and stations in the 70s and 80s. The result was images that are not only great to look at, but also captured a significant chapter in the city's history. So it's no wonder that VGF approached the artist in the spring of 2018 to discuss installing the murals in a Frankfurt subway station. Ahrl&eacute; was very fond of the idea, but unfortunately did not live to see the beautiful implementation. He passed away on 04 April 2018 and now, almost a year after the artist's death, the murals at the Konstablerwache stop have been inaugurated. This not only makes the works accessible to the general public. It also gives the artist a long overdue tribute at a very prominent location.

Lord Mayor Peter Feldmann said at the presentation of the paintings on Tuesday, March 26: "Frankfurt-born Ferry Ahrl&eacute; has left his mark. He was one of the most diverse artists of his time. Like his birthplace and for many years hometown, he was at home in Europe and involved in the world of music, film, television." His paintings are exhibited in the Burgtheater in Vienna and in the Wandelhalle of our Roman. At the same time he created cycles of paintings on the works of Goethe, Dostoevsky, Morgenstern. "Through Ferry Ahrl&eacute;s works about subway construction, the anonymity of working people is broken, work underground gets faces. Hard work and modern technology becomes vivid and comprehensible." It is the concern of the Frankfurt Transport Authority to combine art in and about public space with the memory of a great Frankfurter.

Thomas Wissgott, Managing Director of the VGF, can only agree: "We are delighted to be able to exhibit these wonderful testimonies to our times on the tunnel walls of the U4/U5 platform in the direction of the main station in future. What many do not know, not only here, but in many other stations are worthy of name artworks to see and now also includes an artist so important for Frankfurt as Ferry Ahrl&eacute;" Wissgott is pleased at the presentation.

All present agreed: Ferry Ahrl&eacute; deserves an appreciation like this - and it should, if possible, not remain with this one. After all, Ahrl&eacute; has created great things in many cultural fields. Born in Frankfurt in 1924, the artist spent his childhood and his training years in Berlin, however, where he studied at the Hochschule für bildende Künste and maintained contact with the Deutsches Theater. Until the end, his wife Sigrid and he had a home in both cities and regularly commuted between the capital and Frankfurt-Dornbusch.

In the 1950s, he was involved with poster art for films by Bellini, Bergmann, Bu&ntilde;uel, Truffaut and Polanski, among others. Ahrl&eacutely engaged with architecture and cityscape; during his time in Paris in the 60s. Back in Germany, he created many picture cycles on philosophical, political and artistic themes. On Dostoevsky, Goethe, Morgenstern and Ringelnatz he wrote whole series of picture cycles.

From the late 70s until 1990 Ahrl&eacute; worked for television on various scripts and series. He portrayed great personalities in his show "Sehr ähnlich, wer soll's denn sein?", including Maria Schell, Marianne Hoppe, Johannes Heesters and many more. For this special and entertaining way he received the "Golden Award" at the "International Film and Television Festival" in New York. In addition to his drawings and paintings, he published a number of books.