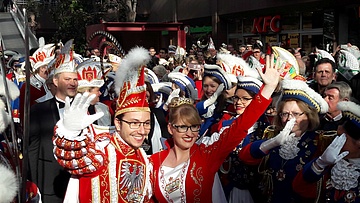 (ffm) Frankfurt's new prince and princess Pascal I and Selina I opened the 2018/19 carnival campaign on Sunday, November 11, in front of hundreds of fools and accompanied by cheerful Helau. This time, the highnesses come from Frankfurter Entsorgungs- und Service GmbH. FES Managing Director Benjamin Scheffler, who is also Honorary Senator of the Great Council, said before the big stage performance at 11.11 a.m.: "We want to put our stamp of sustainability on this year's campaign. We also want to show all Frankfurt residents that we are part of this city. FES and Frankfurt - they belong together."

At Hesse's largest waste disposal company, sustainability is part of the business principle. FES reuses and recycles what others throw away. Educating the public about the conscious use of resources is a legally regulated task that the city of Frankfurt has delegated to FES. To set an exclamation mark for conscious consumption, FES has had various garments made from recycled materials for the new prince and princess. FES works well together with the Grand Council. There is an open ear for the implementation of new ideas.

The solidarity of FES with the city shows itself especially in the carnival. For twenty years, the Rhine-Main makers have participated every year with their own floats in the parades in downtown Frankfurt and in Klaa Paris. There are numerous employees in the company who, in addition to their jobs, plan and design our appearance with a great deal of dedication. Year after year, the employees run with their own costumes, the trainees with the yellow garbage dragon Fessie in front. And the quick and thorough cleaning up immediately after the parades is part of the job of the city cleaning service.

FES is providing the prince and princess for the second time this year, after 1999. It will also be a figurehead for the company in the coming weeks and months, in addition to the carnival. "As FES, we are in contact with the city and its citizens on a daily basis.

Now we want to show that on other parquet," says Scheffler. "In Frankfurt, in Klaa Paris, in the districts and at the clubs, the prince and princess of FES will be welcomed. And it will shout to everyone: 'Frankfurt FES-Revier - No one does it like we do'