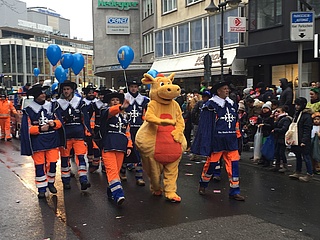 (ffm) Now it's out! The Prince's House for the 2018/2019 Frankfurter Fastnachtskampagne is FES, the Frankfurter Entsorgungs- und Service. During an FES customer event, the news was announced by the two managing directors, Dirk Remmert and Benjamin Scheffler. "One for all. All for our customers" was the motto that evening and now also for the Frankfurter Fastnacht. For many years, FES has regularly participated in the carnival parades in Frankfurt and in Klaa Paris with its own floats and several employees. And as the quasi last parade number, the sweepers and the street cleaners always follow. The presidium of the Grand Council is proud to welcome the Frankfurt company to this position. "When Frankfurt needs us, we are there," assures Benjamin Scheffler. After 1999, FES is providing the Prince's House for the second time in Frankfurt's carnival history and thus also the Frankfurt Prince and Princess 2018/2019. "Who this will be, however, remains a secret until 11.11.", explains Birgit Holm, the marketing manager of FES.