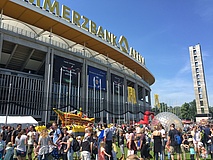 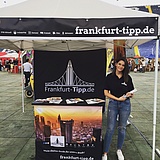 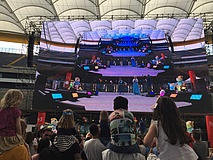 What a day! Over 32,000 visitors flocked to the Commerzbank Arena in bright sunshine on Whit Monday to celebrate this year's Festival4Family. No wonder really, as the festival, which is becoming more and more popular every year, offered more than 120 hands-on activities. In addition, a number of star guests provided great entertainment on the big stage in the arena. Mascots such as the unicorn from the Brothers Grimm Festival in Hanau, children's heroes such as Fireman Sam or Elsa, Anna and Olaf were ready for photos with the little fans and sports clubs presented their varied offers. It was really not boring for anyone.

From 10 a.m. to 6 p.m., numerous wheels of fortune, tasting booths, experimentation and play stations as well as great attractions lured visitors into the arena and onto the large outdoor area, where, among other things, a bouncy castle landscape provided plenty of cheering for children. Driving environmentally friendly Eco-Karts, competing in the Kettler Kettcup, virtually whizzing down a Europa-Park roller coaster or the Fraport luggage belt slide, riding a carousel and experiencing fairy tale theatre - performed by the Galli Theater Frankfurt and Wiesbaden as well as by actors from the Brothers Grimm Festival Hanau: all this, and much more, was on offer.

We from Frankfurt-Tipp.de were also on site with a stand and were pleased about numerous visitors, to whom we handed over our free Frankfurt-Tipp Guide. We were very pleased about the very positive feedback and would like to take this opportunity to thank everyone who stopped by. Hard to believe, but we were not the biggest attraction of the day. Who deserves that title is hard to say. But the mascot parade and Ice Queen Elsa were particularly high on the kids' list.

Big praise goes not only to the organizers, but also to hr3 Morningshow host Tobi Kämmerer, who led through the stage program in a sovereign, charming and humorous manner and really took loving care of the kids who got separated from mom and dad in all the hustle and bustle. On stage, he analysed Eintracht's cup final against Bayern Munich with Eintracht coaching legend Stepi and Mathias Thoma, the director of the Eintracht Museum, among others. Frankfurt Eintracht's cup victory was also a major topic during Kämmerer's discussion with Lord Mayor Feldmann, who watched the match in Berlin's Olympic Stadium. The world's first BABY born fashion show, hosted by KiKA reporter Leontina, delighted doll mums of all ages. Tobi Kämmerer also welcomed on stage "Ritter Rost" author Jörg Hilbert, Jonah, the winner of this year's season of the KiKa show "Dein Song", celebrity chef Mirko Reeh as culinary ambassador of the tourist destination Italy and many more.

The 12th Trifels children's painting competition was also very popular. Here, children between the ages of four and 14 were invited to create a picture on the topic "Off to nature". The many creative contributions made it difficult for the jury members Michael Meckel, Chairman of the Board of Trifels Verlag, children's musician Oliver Mager, Thomas Ziegler, Deputy Director of the Frankfurt Children's Office, Birgit Dreher from the Bärenherz Foundation and singer Salvatore Scire, to choose the winning pictures.

With a big tombola and a charity sale donations could be collected for the benefit of the three charity partners Bärenherz Stiftung, Frankfurter Kinderbüro and Stiftung Lesen. All in all, it was a successful day, which will certainly remain in the memory of all participants and especially the young visitors for a long time. We are already looking forward to the ninth Festival4Family 2019! We will certainly be there again - will you?