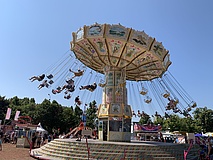 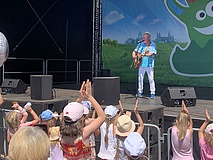 In Frankfurt's Waldstadion was home to the Festival4Family for many years and has established itself there as one of the largest and most popular family festivals in Germany. The mix of colorful stage programs as well as many hands-on stations and play activities for children have attracted many thousands of visitors from all over the region year after year. In 2019 alone, around 30,000 people came to the Festival4Family in Eintracht's living room. After a two-year break, the event broke new ground in 2022. Not only did it take place over two days for the first time. A new location also celebrated Festival4Family's premiere last weekend: the market grounds in Hochheim am Main. In bright sunshine, the perfect start to the Hessian summer vacations was celebrated here.

On more than 32,000 square meters, over 100 attractions awaited the approximately 12,000 visitors of all ages who came to Hochheim over the weekend. Of course, many of the little Festival4Family fans immediately stormed the spectacular bouncy castles that were set up near the entrance. But once they had slid through the dinosaur's mouth a few times, hopped over giant hippos or stormed the knight's castle, the rest of the extensive grounds could be explored. And quickly the variety of offers for the whole family became apparent: There were sports activities, information booths, rides, game corners, creative activities, culinary delights from all over the world, opportunities to win prizes, booths of the Ghostbusters Germany and the Cantina Clan (Star Wars) and of course the versatile stage program. And that provided truly not only with the kids for enthusiasm.

After the performance of the children's rock band Heavysaurus, for example, Martin (43) from Raunheim, who was a guest at the festival with his two sons, was quite surprised: "This is almost like Rock am Ring for families," he said. No wonder that some adults were also carried away by the happy headbanging. It was a little quieter on Saturday with the twins Finn & Jonas, but with their indie-pop songs, they provided for similarly great enthusiasm, as the rocking dinos. In the 14-year-old Amelie from Hochheim, for example, the guys have a very big fan, which have done it especially the lyrics of the catchy songs.

Right party mood came up on Sunday with Volker Rosin. Despite temperatures of over 30 degrees Rosin managed it that nobody before the stage - neither the children, nor the adults - calmly remained standing, while Rosin of the "gorilla with the sunglasses" or about "Mama Lauda" sang. There was dancing, clapping and loud singing along. "That was more than great," 7-year-old Charlotte from Kelsterbach told us afterwards, who was also thrilled by the festival's other offerings. "The children's face painting and the join-in theater were especially nice," the girl told us before heading back in front of the big stage, where some young talents from casting shows like "The Voice Kids" and "Dein Song" did the honors.

With Leony ("Faded Love", "Remedy") there was then a real highlight for young and older pop fans at the end on Sunday. The likeable singer knew very well how to carry away the crowd and make any hint of exhaustion after many hours of fun at the festival completely forgotten. The two friends Larissa and Josy (16) had come especially from Mainz to Hochheim to see their idol live. After the performance, the two were completely out of their minds: "It was awesome! To be able to be so close to Leony, we would not have expected. We are so happy!", the girls told us and proudly showed us the photos they took during the performance.

In addition to the musical acts, there was much more to see on the Main Stage and on the smaller KiKoLoLa Kids Stage - such as colorful dance performances from India, a visit from Eintracht mascot Attila, mascot parades (respect to all the employees who sweated in their costumes at these temperatures and still fulfilled every photo wish of the many children), participatory theater, a breathtaking performance by rope jumping expert Mira Waterkotte or show dancing. hr3 presenter Jan Reppahn, who led through the program on the Main Stage, was enthusiastic about his weekend job. KiKa reporter Leontina and children's musician Oliver Mager paid special tribute to the children in front of the KiKoLiLa stage for bringing so much good humor despite the heat.

"Good humor" sums up the two days of Festival4Family in Hochheim well. Because it was clearly noticeable at all the hands-on stations, booths, stages and rides. A successful debut at the new location, which already whets the appetite for the next Festival4Family, where we will definitely be back!