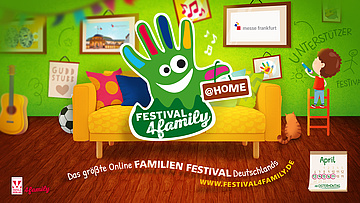 In previous years, the popular Festival4Family has attracted around 30,000 enthusiastic visitors to the Commerzbank Arena. Many exhibitors, clubs and star guests have enchanted children and their parents with great activities and performances - and so it should be again in 2020 at the tenth edition of the festival. But unfortunately, at the moment it is not even possible to think of letting such a large event take place. But Trifels Verlag, which hosted Festival4Family for the first time in 2011, wants to give families a special gift, especially in these difficult times, and is therefore bringing the festival directly to your home.

Under the name Festival4Family @home, the Frankfurt am Main-based publisher will host Germany's largest online family festival from April 13 to 17. With the Festhalle - Frankfurt's "Gudd Stubb" - a very special venue could be won. A great program in the unique ambience of the Festhalle will be shown on Facebook and YouTube. Renowned cooperation partners could also be won for this: HARIBO, BABY born, Fraport, SÃ¼wag, AOK and KÃ¶hler KÃ¼sse will be presenting a series of fascinating shows with great artists for five days from Easter Monday, which can be enjoyed free of charge and in the comfort of your own home - all under the banner of #wirbleibenzuhause

And you can look forward to that: In addition to a concert by the well-known children's song singer Oliver Mager, who had already ensured an extremely good mood at the Festival4Family in 2019, there will also be a spectacular magic show by the multi-award-winning magician Nicolai Friedrich, an online dance workshop with star choreographer Kelechi Onyele, a children's cooking show with TV chef Mirko Reeh or even a virtual football school by the Eintracht Frankfurt football school, among other things. But that's not all: a Kids Fitness Workshop with pole vaulter Katharina Bauer, a Rope Skipping Workshop by multiple German champion Mira Waterkotte and a fairy tale performance by the Galli Theater Wiesbaden are also on the colorful festival program.

The Festival4Family@home will be hosted by Dein Song winner and KiKA web reporter Leontina Klein. The Frankfurt film production team of Framestorm Media will take care of the broadcast and technical implementation. The AES Veranstaltungskonzept GmbH is responsible for the security concept of the festival - due to the strictly defined security measures the realization of the event during the pandemic is only possible at all. The beautiful stage will be provided by the amusement park Taunus Wunderland.

Michael Meckel, CEO of Trifels Verlag GmbH, says about the new concept: "The Festival4Family celebrates its 10th anniversary this year. In view of the Corona pandemic, however, it was the only right decision not to let the festival take place in its usual form, because the health of the visitors and partners is our top priority. Nevertheless, especially in our anniversary year, we wanted to present the many families who visit the event every year with a family program that brings joy and entertainment into their everyday lives during this difficult time," says Meckel. And BjÃ¶rn Fritsch, Marketing Manager of Trifels Verlag GmbH, adds: "Thanks to our great partners, we were able to put together a fantastic online family festival in a very short time, with which we want to support artists who are suffering high sales losses in the wake of the epidemic. The net proceeds from the partnerships with the participating companies will therefore benefit the participating artists."