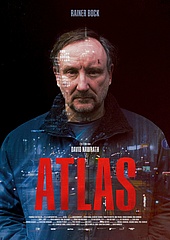 (ffm) De-housing in Frankfurt's Nordend: a mover, hired to manage the involuntary move of a young family man, believes he recognizes in the young man his son, whom he abandoned decades ago. Father and son get in touch, become closer. The son, however, has no idea that the mover is his father. Then the son is in danger - the real estate mafia is after him. And his father wants to protect him.

. that's the story David Nawrath's feature debut, "Atlas," tells. It's about a difficult father-son relationship, gentrification and criminal machinations in the housing market. Atlas" was shot by 23/5 Filmproduktion in Frankfurt's Bahnhofsviertel and Nordend districts, among others.

The Film Advisory Office in the city's Main Office and City Marketing is now presenting "Atlas" in cooperation with its sponsor "HessenFilm und Medien" in its new "Frankfurt Previews" series: on Friday, March 29, at 6 p.m., the 100-minute film will celebrate its Hesse premiere at the Lichter Filmfest. The film screening in the Harmonie cinemas will be followed by a question-and-answer session with lead actor Rainer Bock (Walter, the furniture mover and father) and a discussion about ever-increasing rents and gentrification. Through the City of Frankfurt's Facebook page http://frankfurt.de/facebook, the social media team is giving away 5x2 tickets to the preview.

David Nawrath (director and screenplay) and his co-writer Paul Salisbury won the Emder Drehbuchpreis for "Atlas", which has already been screened at the Berlinale, and are nominated for the German Screenplay Award. In addition to Rainer Bock, the ensemble includes Albrecht Schuch, Thorsten Merten, Uwe Preuss, Roman Kanonik and Nina Gummich.

The city's "Frankfurt Previews" series shows films in which the city plays a role. Whether real or animated film, short, feature, documentary or television film and series - works that tell stories and ideas away from blockbusters and the mainstream will be shown on the screen.