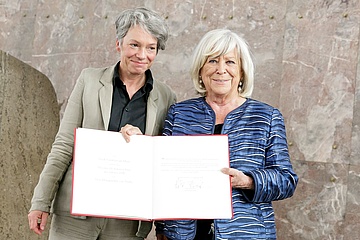 (ffm) In a festive ceremony on Tuesday, September 11, in the Paulskirche, the triennial Theodor W.-Adorno Prize, awarded every three years, was presented to filmmaker and director Margarethe von Trotta. This is only the second time that a woman has been awarded the Adorno Prize of the City of Frankfurt. After a welcoming address by City Councillor and Head of the Department of Culture Ina Hartwig, film and television producer Günter Rohrbach, President of the German Film Academy from 2003 to 2010, held the laudatory speech. Numerous guests attended the award ceremony.

Cultural Affairs Director Ina Hartwig expressly welcomes the choice of Margarethe von Trotta: "In times when the democratic foundation of our society needs to be defended more urgently than ever, the award of a decidedly socio-political director like Margarethe von Trotta is an important signal. With her great films about Rosa Luxemburg and Hannah Arendt, for example, she has proven herself to be an outstanding artist who has familiarized a broad audience with courageous female thinkers in the spirit of enlightenment, humanity and emancipation."

The 50,000 euro prize is awarded every three years by the City of Frankfurt in memory of the philosopher Theodor W. Adorno and serves to promote and recognize outstanding achievements in the fields of philosophy, music, theater and film. Adorno worked for many years at the University of Frankfurt sopie the Institute for Social Research and was one of the most renowned representatives of the Frankfurt School. His writings, including "Minima Moralia. Reflections from a Damaged Life," "Negative Dialectics," and the "Dialectic of Enlightenment," co-authored with Max Horkheimer in exile, are among the most influential philosophical and cultural-theoretical works of the 20th century.

The Board of Trustees of the Theodor W.Adorno Prize 2018 includes, in addition to the permanent members according to the statutes, Prof. Petra Gehring (Technical University Darmstadt), Prof. Martin Saar (Goethe University Frankfurt), Christian Thomas (Feuilletonleiter of the Frankfurter Rundschau) and the writer and book laureate Frank Witzel this year. Previous laureates were Georges Didi-Huberman (2015), Judith Butler (2012) and Alexander Kluge (2009). The first laureate was sociologist Norbert Elias in 1977. The first time a filmmaker was awarded the prize was in 1995 with Jean-Luc Godard