Final spurt in the Theatrallalla
from FFM Aktuell 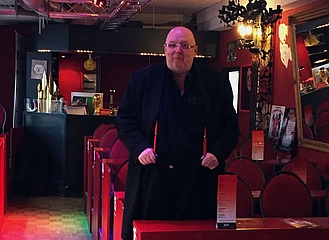 Just a few more weeks and the small theatre in Frankfurt's Nordend will be history. "I'm already done with it," reveals Thomas "Bäppi" Bäppler-Wolf at the last press conference in the charming theater where he brought his show and later plays on stage for twenty-five years. About the background to the end of the Theatrallalla we had already reported to you HERE

Now it is so far. After once again the wonderful Kleist adaptation "Der zerdepperte Bembel" celebrates its revival for a few performances and the show "Hessisch fer Aafänger" will be on view until April 28, the week from April 29 to May 05 will be a last look into the past. Then every day a different one of the most successful pieces from the past years will return, starting with "Fledermaus" (29.04.), followed by the wonderfully offbeat Sissi parody "Sissi - Beuteljahre einer Kaiserin"(30.04.). The charming Schlager revue "Verliebt, verlobt, verheiratet" (01.05.) and its sequel "Mandolinen und Mondschein" (03.05.) will also provide good humour once again. And of course the last original production in the Theatrallalla must not be missed: "Ben Hur and the Rats of the Racecourse" (02.05.) is also on the farewell programme. On the penultimate evening, the actors of the "La Cage aux Folles" production from the Frankfurt Volkstheater will meet at Bäppi's to talk about the successful production and share amusing anecdotes with the audience. And of course there will be singing on this best of evening.

Yes, and then on 05 May it's finally goodbye - but also hello! Because with the last performance a great and important chapter comes to an end, but the book is far from being closed. Bäppi makes it clear once again: "You won't get rid of me that quickly!" After the already sold-out farewell show "Goodbye and Hello" and a fundraising sale (16 + 17.04. and 10 - 12.05.2019), the lights go out in the North End, but soon after it goes on. From the end of August, Thomas Bäppler-Wolf will go on tour with the new Bäppi show "Ja ja der Äppelwoi". Then he will slip back into the role of the cider landlady Lia, which now suits him better than still standing on stage in a glitter dress.

Also plays will initially be seen in various locations. The program includes the revival of "Miss Moppel - 16:50 to Offenbach" and Bäppi's version of "Ein Herz und eine Seele", which will premiere at Haus Gallus on November 22. Whether he will now be on the road permanently, Thomas Bäppler-Wolf does not want to commit himself to that. "I am looking for something new, however, it should be significantly smaller than before." An old Caf&eacute; or a former cider pub to take over, he could imagine well. But he is in no hurry to do so. "Life is too short to rush," the artist, who also serves as a tour guide for New Old Town, tells us. "Who knows where it will take me." We're excited and wish Bäppi and his team all the best on their new journey.