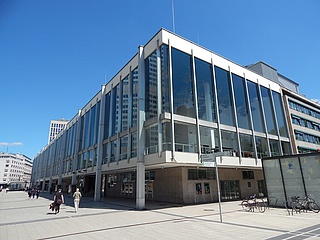 The curtain is finally rising again: as it can be assumed that the infection figures will remain at a low level, the Städtische Bühnen Frankfurt will resume performances after seven long months. From Friday, June 11, the Schauspiel and Oper will once again open their doors to their audiences.

On the first weekend, Schauspiel Frankfurt will host two premieres at the Kammerspiele: "Malina" directed by Lilja Rupprecht on Friday, June 11, as well as the play development "NSU 2.0" by Nuran David Calis on Sunday, June 13. This will be followed the following weekend by Thomas Melle's play "ODE" at the Kammerspiele on June 19 and "Der Theatermacher" by Thomas Bernhard directed by Herbert Fritsch at the Schauspielhaus on June 20.

The full schedule for June and July is available on the Schauspiel Frankfurt website at http://www.schauspielfrankfurt.de.

The Frankfurt Opera program will include a concert performance of Richard Strauss' "Ariadne auf Naxos" beginning June 11. The musical direction will be by Berlin Staatskapellmeister Thomas Guggeis, with ensemble member Ambur Braid taking the title role. With both artists, the revival of "Salome", which fell victim to the pandemic, was planned for earlier this year. The programme continues with performances of Mozart's "Le nozze di Figaro" from 12 June and a song recital with baritone Johannes Martin Kränzle and Hilko Dumno at the piano on 15 June. This will be followed by the world premiere of Lucia Ronchetti's "Inferno" in concert at the Bockenheimer Depot in co-production with Schauspiel Frankfurt from 27 June and the Frankfurt premiere of Poulenc's "Dialogues des Carmélites" directed by Claus Guth at the Opera House from 4 July. For the latest information, visit Oper Frankfurt's website at http://www.oper-frankfurt.de

.Attendance at the theatre is open to all visitors who can show proof of having received their second vaccination at least 14 days ago on the day of their theatre visit, a negative coronary test for the day, or proof of Covid-19 recovery. For the protection of all patrons, it is mandatory to wear mouth-to-nose coverings throughout the performance.