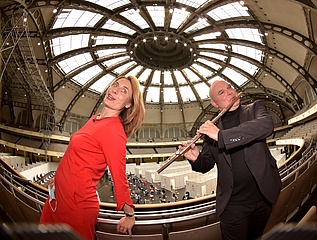 For over a year, no music was heard in the Festhalle. True, for several months now there has been a flurry of activity in the hall, which houses the Frankfurt Vaccination Centre. But there has been no culture here for far too long. That changed on Whit Monday. On this day, an unusual concert series of the Frankfurt Chamber Opera started. The ensemble has long been known for performing in unusual places such as factory halls, disused streets and Frankfurt's Palmengarten. But a vaccination center as a stage is still a real a novelty.

For a total of 16 afternoons, Kammeroper Frankfurt will bring a little concert feeling back to this location from the first level of the Festhalle. Over a dozen solo and duo concerts will be performed, with the aim of taking away a little of the apprehension or trepidation of those waiting in the face of the unknown - and, if possible, turning the spade in the huge hall into a small celebration.

In doing so, it is ensured that the artists can maintain maximum distance from those being inoculated. And: The hygiene rules also apply at the performance location in the rank, the mask may only be taken off for the artistic performance, only alone or as a duo is performed. The first program was performed by mezzo-soprano Dzuna Kalnina, pianist Stanislav Rosenberg and Walter Dorn on the flute. Performances included arias from Mozart's "Cosi fan Tutte", George Bizet's "Carmen" and "Die Fledermaus" by Johann Strauss.

"This idea is certainly unique in Germany! I thank the Chamber Opera Frankfurt and its musicians for not only shortening the time for those waiting, but also helping them relax a little. With every inoculation, the hope grows for a summer in which culture can finally take place again," says Head of the Department of Culture Ina Hartwig. "We were happy to make this great offer possible for the Chamber Opera," adds Head of Health Stefan Majer. "The vaccinated will come out of the vaccination center happy and elated, and not only because of the coveted vaccination, but also because of the beautiful musical accompaniment. A small foretaste of the near future with many concerts in the Festhalle, which should make us all feel positive."

Positive mood - that is exactly what the musicians of the Chamber Opera want to spread. Therefore, for their guest performances at the Vaccination Centre, such classical music was also chosen to drive away the shadows of the past year, while always remaining discreet. Incidentally, music to accompany medical treatments has been known since Greek antiquity. Even Apollo was equally responsible for healing art and music, and even today patients appreciate the soothing sounds of classical music during surgery or MRI examinations, but here usually from the canned sound.

A really nice action that was put on here, not only to make the atmosphere in the vaccination center very special, but also to give people hope for what hopefully will soon be culturally possible again.