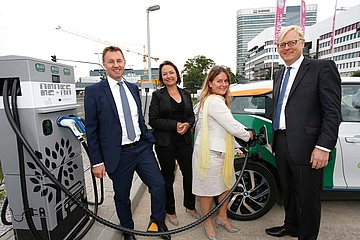 (kus) In Frankfurt's newest district Gateway Gardens, the first fast charging station for electric vehicles opened on Tuesday, August 8, on a property owned by Fraport AG just 300 meters from Frankfurt Airport's Terminal 2. Initiators for this location are the Economic Development Department of the City of Frankfurt, Fraport AG and Grundstücksgesellschaft Gateway Gardens.

Via the operator "Allego GmbH", four charging columns, each with 50 kilowatts of power and the usual connections, are now available at the western entrance to the quarter on Thea-Rasche-Strasse. Electric vehicles can be charged to 80 percent of their battery capacity in around 20 minutes. The charging station is part of the practical research project SLAM ("Fast Charging Network for Axes and Metropolises") and is funded by the German Federal Ministry for Economic Affairs and Energy (BMWi).

"At Gateway Gardens, the aim from the very beginning was to develop a sustainable and future-proof quarter. This means that alternative drives play a major role for us," explains Christian Balletshofer, Divisional Director Real Estate at Fraport AG. "The location at the western entrance to Gateway Gardens in Frankfurt Airport City is also ideally accessible from the A3 and A5 motorways and once again proves the excellent transport links of the quarter and its central location in the heart of Europe. As a co-partner, Fraport AG has long been involved with various projects in the field of electromobility, and the new fast-charging station is of great importance to us."

"The years in which electromobility eked out a niche existence are over. Current events will mean that it is impossible to imagine our cities without e-vehicles," stressed Markus Frank, Head of the Department of Economic Affairs, in his remarks. "The city of Frankfurt am Main has already implemented a large number of projects with electric vehicles, both in the municipal fleet and together with companies. The fact that this fast-charging station is directly adjacent to the taxi waiting loop at Frankfurt Airport particularly pleases me, and more projects will follow in this context."

In the development of Gateway Gardens, the three private-sector partners Fraport AG, Groß & Partner Grundstücksentwicklungsgesellschaft mbH and OFB Projektentwicklung GmbH, as well as the City of Frankfurt am Main, have been pursuing the orientation of the quarter towards sustainability since the start of construction for the new Frankfurt district. All buildings must exceed the ENEV by up to 30 percent. Green roofs are mandatory as part of the rainwater management system. The lighting has been converted to energy-efficient LEDs and the extremely high green content of the quarter is reflected in the preservation of the old trees in the park. For this overall orientation, the quarter has already been awarded platinum by the German Sustainable Building Council (DGNB) as the first complete urban district in Germany.

Furthermore, the quarter will be connected to the nationwide cycle path express network. In spring 2017, pedelecs were purchased as part of the EU's CHIPS funding programme, which can be used to travel to the airport, within Airport City and also to Frankfurt city centre in a convenient and environmentally friendly manner. With the "Gateway Gardens" S-Bahn station, which has been under construction since 2016, the district will be connected to the local public transport system at the end of 2019 and people working here will be able to do without their own cars when travelling to their workplaces.

Gateway Gardens is one of the largest district developments in Germany with 700,000 square metres of projected gross floor area on a site of 35 hectares. The new Frankfurt district is located at the centre of the most important transport axes: at Frankfurt/Rhine-Main International Airport, at the largest airport railway station and at the largest motorway junction in Germany. From 2019, Gateway Gardens will also open its own S-Bahn connection