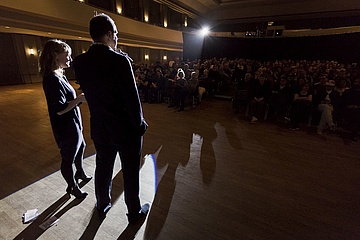 The now twelfth edition of the renowned LICHTER Filmfest International is approaching with great strides. From March 26 to 31, many national, international and regional film highlights will be shown again - many of them as Hesse, German or even world premieres. Now the first highlights of this year's festival are also fixed, whose main theme in 2019 will be "Nature". In addition, one year after the emergence of the "Frankfurt Positions", the discussion about the future of German film will continue on the festival Friday.

The summer of the century in 2018 proved it once again: Climate change is shaping our everyday lives. Rising sea levels and periods of extreme heat could make entire parts of the world uninhabitable in the coming decades. Global refugee movements will become the great challenge of the future. "How we deal with our environment is probably the most pressing question of our time," says LICHTER Festival Director Gregor Maria Schubert. With the main theme "Nature", LICHTER wants to sensitize the visitors of the twelfth festival edition to such future scenarios. But the diversity of nature will not be neglected in the international film programme either: "We have set out to find artistic positions in which the beauty of our world illuminates the screen," says Johanna Süß, responsible for the overall curatorial concept of the international series.

International film programme on the theme of "Nature"

"No other medium is able to convey natural spectacles so impressively," adds the deputy festival director. "The film Aquarela allows us to feel the transformative beauty and raw power of water." At the same time, no other art form can make man's relationship with nature more tangible. This is literally true of the Oscar-nominated documentary Free Solo, which impresses with breathtaking climbing footage in Yosemite National Park. Carlos Reygada's new film Nuestro Tiempo will have its German premiere at LICHTER. In the semi-documentary feature film Von Bienen und Blumen (Of Bees and Flowers), Lola Randl and her family conducted a self-experiment: how does life change when a Berlin city dweller moves to the countryside in the Uckermarck region.

The films in the regional long and short film programme bring the diversity of Hessian filmmaking to the screen. "This year's regional competition is exceptionally strong and multi-faceted - moving refugee fates will be as much a part of the programme as an animated film from Frankfurt that can easily rival Pixar Animation Studios," says Schubert.

World premiere at LICHTER is Monowi Nebraska. In the film, Lilo Mangelsdorff visits a town in the American middle of nowhere. The special thing: Only one inhabitant and her snack bar are still there. As a German premiere the Mainz producer Christoph Thoke brings the film Erased to Frankfurt. The Watson&acute;s Hotel (directed by Regunath Vasudevan, Peter Rippl, Nathaniel Knop) about life in a dilapidated hotel in the Indian capital Mumbai also screens as a German premiere at LICHTER.

visitors can also look forward to numerous Hesse premieres. In Atlas, director David Nawrath tells a father-son story that becomes a suspenseful thriller under the pressure of a criminal deprivation in Frankfurt. Michael Schwarz's debut film Die Kandidaten (The Candidates) portrays six up-and-coming politicians and shows how election campaigns work at grassroots level, far away from Berlin. In Facing The Dragon, director Sedika Mojadidi followed a successful Afghan journalist over several years. When the US military leaves the shattered country and the Taliban begin to terrorise it again, the woman flees to Darmstadt. At LICHTER, the Lauenstein brothers present their new animated film The Fabulous Four about the house kitten Marnie - fun for the whole family.

The productions were all made with the participation of filmmakers and sponsors from Hesse and the Rhine-Main region. The jury consisting of actress Jenny Schilly, director Susanne Heinrich (winner of the Max Ophüls Award 2019 for the film The Melancholic Girl) and distributor Birgit Gamke (Die FilmagentInnen) will decide who can take home the White Bembel

For all further info on the films and the festival, please visit: <link https: lichter-filmfest.de _blank>