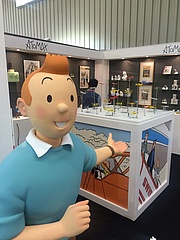 The hearts of fans of the popular comic characters Tim and Struppi will beat faster here very quickly: A pop-up store has opened near the Frankfurt Cathedral on Saturday, October 12, around the comic world from the pen of Hergé. The Cologne-based Hergé licence dealer Atomax Merchandising will be giving a guest performance at Frankfurt's Last Century Modern until 16 November. There are real treasures to discover here: In addition to rare screen prints, limited figures and a valuable bronze, there are also many lifestyle objects for every purse.

But that's not all: from comic books to posters, postcards, coffee cups, espresso cups, cereal bowls, writing utensils and stationery as well as secondary literature about Hergé or Tintin and Struppi, are offered for five weeks in Domstraße 6 (directly at the Kaiserdom). Also key rings, figures and objects in all available sizes up to rare pieces, which were manufactured only in small edition, are exclusively available here and for a short time. Those who love Tim and Struppi should not miss this guest performance.

One of the many highlights of the Frankfurt pop-up store, however, is a bronze figure from the band "Tim in the Land of the Soviets", of which there are only 17 copies worldwide. No less coveted are the extremely rare screen prints that Hergé produced for the World Wide Fund For Nature (WWF) in the early 1980s. This portfolio was limited to a total of 250 copies, all signed by Hergé - one of these special portfolios with ten hand-signed prints can be found in the store.

"In addition to our enthusiasm for comic figures, we attach great importance to design and an appealing presentation. With Last Century Modern we have found the ideal location to present the exclusive Tim and Struppi products", says Atomax owner Thomas Schützinger. Tim and Struppi experts will be enthusiastic about the variety of objects on offer, but interested newcomers are also invited to immerse themselves in the fascinating world of comics at Hergé.

The beautiful business premises of the two-storey shopping gallery are known far beyond Frankfurt's borders for their particularly aesthetic selection of goods, which is more reminiscent of a museum than retail. "Here customers can browse to their heart's content between beautiful, rare and precious things," says Last Century Modern Managing Director Arman Khoschbonyani, who has also long been enthusiastic about the world of Hergé.

Georges Remi, known as Hergé, developed his own artistic drawing style in the Tim and Struppi comics, the "ligne claire" (French for clear line), with precise contours and flat coloration. With this clear formal language, which makes it easier for the reader to identify with the characters portrayed, the Belgian achieved cult status. Hergés first Tintin and Struppi story appeared in 1929, and all 24 comic volumes always reflect themes of the zeitgeist of the time. His home country celebrates the famous comic artist and pays tribute to his work with a foundation and its own museum.

As a monument to comic history, the adventures of the young reporter with his clever dog have fascinated comic fans for 90 years: the issues have been sold more than 230 million copies worldwide and translated into more than 80 languages. Following on from this successful history, Atomax Merchandising is now increasingly focusing on the artistic appreciation of the work and advocating a new evaluation of Tintin and Struppi in Germany. The Cologne comic-strip retailer is regularly represented with its products at trade fairs, where the aesthetic style of its presentations and the cult status of the comic-characters (not just Hergés heroes) convince customers and retailers alike.