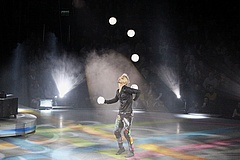 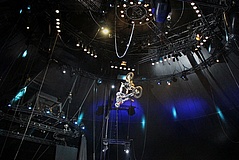 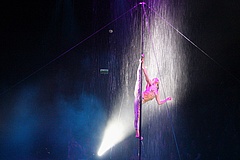 It has now been 30 years since the event company Flic Flac presented its first show "Not Just Any Circus". And even after three decades, the enthusiasm that Flic Flac generated with it remains unbroken. The guests at the Frankfurt premiere of the new show "Punxxx" were able to see this for themselves on Thursday evening. In the striking yellow and black circus tent, the audience was treated to a mixture of spectacular artistry, extreme thrills and quirky comedy. And this created a great atmosphere right from the start, which would make even big rock stars turn green with envy in places.

From the very first performance, in which the Mad Flying Bikes lived up to their name, it was once again clear that Flic Flac is simply different in the best sense of the word. Not only the performances themselves, but also their staging give the show its very special character, which is consistently carried through to the end. There is plenty to marvel at - for example when the Czech Zdenek Pol&aacute;ch reinterprets juggling in a refreshing way with apparent ease, when the Italian Romy Meggiolaro mixes fascinating antipodean games with a rocking attitude or when the Ukrainian trio Three G presents equilibristics between grace and girl power. A touch of eroticism blows through the tent when Olha Peresada performs sensual body art on the Chinese Pole to "Purple Rain", while it suddenly starts to rain in the ring, or when the duo Splash enchants the audience as mermaids in Flic Flac style.

But there are also moments when the spectator is in a cold sweat. For example, when Alex Michael balances upside down under the tent roof - and completely without a net. Alain Alegria's act is also nerve-wracking, as he not only swings back and forth unsecured at dizzy heights, but also balances on just one leg or makes himself comfortable on a folding chair. You could see some people in the audience looking upwards with open mouths and wide open eyes. The audience also held its breath at the Globe of Speed: The daredevil motorcyclists of the Helldrivers did their laps in a very confined space. In the end, no less than seven men and one woman share the globe - pure madness!

In between, however, it is also allowed to exhale and laugh heartily every now and then. The Swede David Eriksson bridges the time between the performances with his very special guerilla comedy and shows a kind of ping pong that you have never seen before. And the duo Naked Lunch present some really weird humour of the British-Irish kind just before the finale. After this number you will probably always see commercial frying pans with different eyes. After the diaphragm was strained, it went to the finale once again really high: The Holy Warriors, ten artists of the China National Acrobatic Troupe mix high-tech and precise jumping techniques to a sensational number that you simply must have seen.

"Punxxx" offers entertainment at world-class level. From the pleasant atmosphere in the spacious marquee, to the fact that you actually have a good view of the action in the ring from every seat in the marquee, to the two-hour show that doesn't have a moment of boredom - it all adds up to an unforgettable whole here. You should not miss this. In Frankfurt, "Punxxx" will be performing at the Festplatz am Ratsweg until 01 March. You can find the individual dates HERE in our event calendar. You can also find all other info at: https://www.flicflac.de/