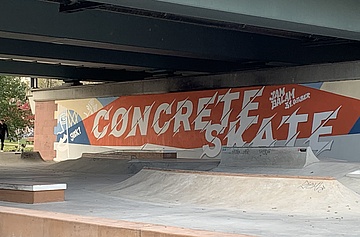 The skater park under the Peace Bridge, once known as Azita Park, hasn't had a particularly good reputation lately. Aging ramps, too much dirt, and not really an inviting atmosphere have noticeably diminished skater enjoyment here. At the end of 2017, the club Concrete Skate decided that something absolutely had to change here. With the support of the Gutleut district office, the initiative was passed on to the responsible offices at the city. Then the offer came from the green space office that the association should work out and submit a concept for the Azita. After a few months later, the concept was submitted and extremely well received, it went very quickly: the city tendered the planning of the new park, for which then Yamato Living Ramps from Hanover got the contract.

After the planning and the tender in April this year could begin with the construction work, the new skate park could finally be officially opened last Sunday. To inaugurate the facility Concrete Skate had invited to the skate contest "Jam Balam" on this day. Many interested visitors from Frankfurt and the surrounding area came to the Main to either try out the new facility themselves or to watch the skaters perform their tricks.

Both the ramps, which are suitable for professionals as well as beginners, and the new flooring are well received. Due to the roofing by the Peace Bridge, the facility is not bound to the weather. However, it should not be used when it is very wet. The atmosphere on the opening day was a very positive sign for all those responsible that a really successful alternative to the skate park at the harbour park has been created here. If there is now still just for the dark season a lighting under the bridge, the total package would be almost perfect.

So, up on the skateboard and try for yourself once the new skater park on the Mainufer!