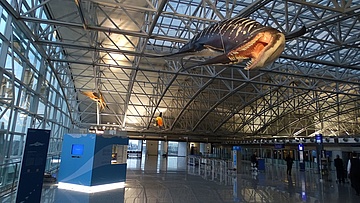 The dream of flying is almost as old as mankind itself. Since time immemorial, we have been fascinated by anything that can fly and have tried to emulate them. This may also be one of the reasons why a place like Frankfurt Airport exerts a certain fascination on people. That's why the airport is also the perfect place for an exhibition that the Senckenberg Natural History Museum is now presenting in Terminal 2 as part of the anniversary year of the Senckenberg Gesellschaft für Naturforschung in cooperation with Fraport AG.

In "Evolution of Flight", fascinating facts about flying are presented in texts, pictures and films under large replicas of flying dinosaurs on two so-called "Sciencecubes". What do octopuses and rockets have in common? And how did pterosaurs inspire the construction of gliders? These and many other questions are answered in this beautiful exhibit.

It is particularly interesting to trace how close the flying machines developed by humans are to the "originals" from the animal world from which they were inspired. For example, the exhibition shows that the propeller of a helicopter is strongly reminiscent of dragonflies, which achieve amazing flight performance: Dragonflies reach speeds of up to 50 kilometers per hour with a wingbeat frequency of 30 beats per second. The acceleration reaches thirty times the acceleration due to gravity, which is far more than a modern fighter jet.

Airplane wings are a stroke of engineering genius, inspired by pterosaur, bat, and bird wings. "Flying," by the way, is not exclusive to the air, but also to water: octopuses move through the sea by recoil - this principle is also used in rockets.

The "Evolution of Flight" exhibition is open around the clock to anyone interested. It is located in the Skyline Platform area in Terminal 2, and admission is free. Guides from the Senckenberg Natural History Museum regularly lead visitors through the exhibition. 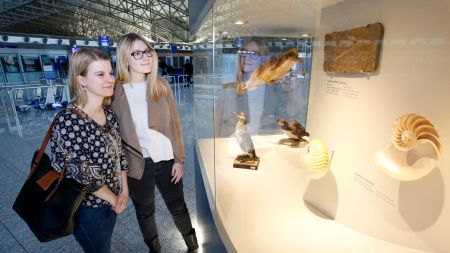 About Fraport AG and Frankfurt Airport

. Fraport AG is a full-service provider in airport management and is one of the leading international companies in the airport business with ten airport investments on three continents. In 2015, the Group generated an annual result of around €297 million on revenue of €2.58 billion. In 2015, a total of almost 111 million passengers used the airports with a Fraport share of more than 50 percent. "Have a good trip! We make it happen" is the claim to which the airport operator has committed itself in its mission statement. The customer is the focus of all services. This claim applies both at Germany's largest aviation hub in
Frankfurt and at all sites worldwide.

At its home site in Frankfurt, Fraport welcomed more than 61 million passengers in 2015 and handled a cargo volume of around 2.1 million metric tons. In the 2016/17 winter flight schedule, 88 airlines fly from Frankfurt to 248 destinations in around 100 countries worldwide. With over 130 intercontinental destinations, half of all destinations are outside Europe, which highlights Frankfurt's position as a major international air traffic hub. As a result, Frankfurt Airport ranks second in cargo and fourth in passenger traffic among European airports.

About the Senckenberg Nature Research Society

. Exploring and understanding nature with its infinite diversity of life forms in order to preserve and sustainably use it as a basis of life for future generations - this is what the Senckenberg Nature Research Society has been working for for 200 years now. Exhibitions and museums are the showcases of natural research through which Senckenberg shares current scientific findings with people and provides insights into past and present changes in nature. The Senckenberg Nature Research Society is a member of the Leibniz Association. The Senckenberg Nature Museum in Frankfurt am Main is supported by the City of Frankfurt am Main and other
sponsors and partners. More information at: www.senckenberg.de.

200 Years of Senckenberg! 2017 is an anniversary year at Senckenberg - the society, founded in 1817, has been conducting research for 200 years with curiosity, passion and commitment to nature. Senckenberg is celebrating its 200-year success story with a colorful program consisting of
many events, specially created exhibitions, and a large museum festival in the fall. Of course, current research and future projects will also be presented.

You can also find more info at: www.200jahresenckenberg.de