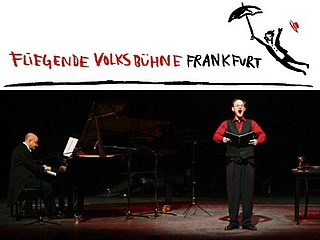 After much hassle and uncertainty (we reported on it HERE), there is finally good news for the Fliegende Volksbühne team: the new premises in the Grosser Hirschgraben will be handed over to the theatre on 2 December. After that, the play can start soon. The plan is that the first play will be performed on the new stage on January 24, 2020.

This date was agreed upon by theater director Michael Quast and Frank Junker, managing director of ABG Holding Frankfurt, on Friday, September 27, in a clarifying conversation scheduled by cultural department head Ina Hartwig. For the financial difficulties that have arisen for the Fliegende Volksbühne as a result of the postponed opening and the associated cancellation of numerous performances, the head of culture promised relief.

"The agreement reached today is intended to give all parties planning security," says head of culture Hartwig. "I thank Michael Quast and Frank Junker for their constructive involvement in a difficult initial situation. The Fliegende Volksbühne can now set a reliable date for its long-awaited reopening in the Cantate Hall. The City of Frankfurt will effectively relieve the theatre in its current difficult financial situation."

"We will accelerate all construction measures so that the landing permission for the Fliegende Volksbühne can be granted for December 2, 2019," Frank Junker commented on the handover of the premises to the future user. And theatre director Michael Quast was particularly relieved that a fixed date for the handover and opening has now been set and already whetted the appetite for the first premiere: "We are starting with the world premiere of Heinrich Hoffmann's &sbquo;Struwwelpeter' in a wonderful co-production with Ensemble Modern. The work is composed especially by members of Ensemble Modern."

The opening of the new venue had most recently been postponed indefinitely. The reason was construction delays due to a mold infestation in the basement of the theater construction site. Most of the events scheduled to take place at the new venue through the end of 2019 have been canceled, but four performances may take place in replacement venues.