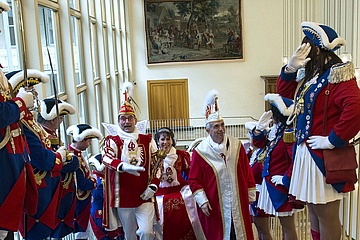 The reception so special already makes the arrival of the Prince and Princess. Also this year, his royal highness Mathias I. and her sweetness Conny I., together with the president of the honorary senate, Axel Heilmann, and Lord Mayor Peter Feldmann drove from Friedrich-Stoltze-Platz in the magnificent horse-drawn carriage of the Great Council in the direction of Römer, accompanied by the foolish entourage - a first small carnival procession, which will be followed in a few weeks by the big procession through the Frankfurt city center.

Arrived at Frankfurt City Hall, the festive reception in front of the Kaisersaal began punctually at 11.11 am. Feldmann and Heilmann welcomed the guests to Frankfurt's Römer and wished them a successful 2018 carnival campaign.

In his foolish speech, Frankfurt's city leader thanked the members of the associations and praised "the many good spirits of the associations" for their work. Because, according to Feldmann, the principle also applies to carnival: "Without voluntary work, this society would be a great deal colder and more anonymous." With this year's motto "Frankfurts Leut&acute; e Freud&acute; zu mache, bringt unser Narrenherz zum Lache!" and the carnival greeting "Frankfurt Helau" Feldmann's speech ended to great applause from those present.

Following this, Axel Heilmann brought the Lord Mayor New Year's greetings from the Grand Council as well as its affiliated associations and presented Feldmann with the traditional insignia of "Weck, Worscht und Woi".