For the 6th time: Oper Frankfurt 2022 again chosen as "Opera House of the Year"
from FFM Aktuell 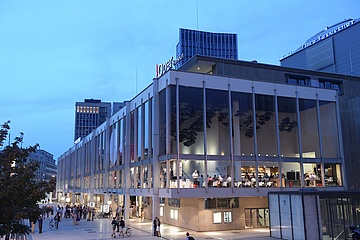 Although it has almost become a tradition, it is always a reason for joy and an occasion for congratulations: after 1996, 2003, 2015, 2018 and 2020, Oper Frankfurt has now also been voted "Opera House of the Year" for the sixth time in 2022 in this year's survey by the magazine "Opernwelt" . This is a special honor for Bernd Loebe, under whose directorship five of these six awards fell. The reasons for the top position were, in particular, an innovative, courageous program planning as well as outstanding directorial achievements. One of these, Christof Loebe's lucid reading of Nikolai Rimsky-Korsakov's widely unknown stage work The Night Before Christmas, is the "Performance of the Year" for the 2021/22 season. This time, the title of "Choir of the Year" also goes to Frankfurt and its choir director: Tilman Michael. The reason for this was the extraordinary performance of the singers in Luigi Dallapiccola's literally breath-taking music theater "Ulisse".

There was great unanimity among the more than 40 international critics on the question of the "Conductor of the Year": Kirill Petrenko received the most votes for his brilliant interpretation of Tchaikovsky's "Queen of Spades" in Baden-Baden. The vote for "Director of the Year" was somewhat closer. Kirill Serebrennikov's interpretation of Shostakovich's "Nose" at the Bavarian State Opera and Weber's "Freischütz" in Amsterdam won out over Claus Guth (Georg Friedrich Haas' "Bluthaus" at the Bavarian State Opera and Pascal Dusapin's "Il Viaggio, Dante" at the Festival d'Aix-en-Provence). There was a tie in two other categories: Peter Eötvös' "Sleepless" at the Berlin State Opera and Stefan Wirth's "Girl with a Pearl Earring" at the Zurich Opera House were equally named "World Premiere of the Year"; the title of "Rediscovery of the Year" was shared by "Frédégonde" by Ernest Guiraud, Camille Saint Saëns and Paul Dukas (Dortmund Opera) and "Fremde Erde" by Karol Rathaus (Theater Osnabrück). There was a real surprise in the category "Singer of the Year": Vera Lotte Boecker was especially chosen for her ravishing singing as well as acting performance as Nadja Albrecht in "Bluthaus".

Bernd Loebe, Intendant and Managing Director of Oper Frankfurt says that these three awards in the context of the critics' survey of the trade magazine 'Opernwelt' have a special meaning for all employees of Oper Frankfurt and for him, the entire team is nevertheless deservedly awarded for a season in which Oper Frankfurt had to struggle with numerous serious difficulties due to the pandemic. "The future now holds a multitude of tasks in store, such as the upcoming wage increases, the energy crisis and, last but not least, the question of the renovation or new construction of the Städtische Bühnen. In this context, the awards are an important signal to politicians to continue to support the opera in the future so that Frankfurt can remain a center for high-quality musical theater," Loebe said.

Ina Hartwig, Head of Department for Culture and Science said, "I congratulate Intendant Bernd Loebe on this more than deserved award. In my congratulations I include the entire team, General Music Director Sebastian Weigle as well as all employees in front of and behind the scenes - they have all contributed to this great success. Oper Frankfurt has thus repeatedly been selected as the most interesting house on the musical map of the German-speaking world. We in Frankfurt know this, and visitors to our city also enjoy what this internationally esteemed house has to offer. Our opera thus plays a decisive role in the success of Frankfurt as a city of culture in the world. And it is precisely this status that is both a source of pride and an obligation for the city and for the entire region: we must work together to ensure that this top level can be continued in the future."

You can find all the information about the current season at Oper Frankfurt at: https://oper-frankfurt.de/